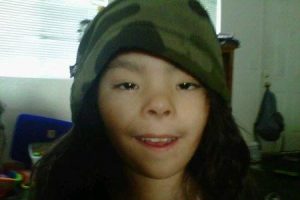 Moebius Syndrome – Alexis: Alexis rubi was born on 7/30/06. She was 6 weeks premature and weighed 6 lbs 4 oz and was 18 1/2 in long. She was our perfect angel but soon right after the doctor notice her left ear wasn’t quite developed and she had skin tags on both sides so they decide it would be best to get a ultrasound of her kidneys, and some other test but everything was fine, I was soon to take my princess home. I had been breastfeeding when we realized she was tongue tied and couldn’t latch on properly that’s when it started, she couldn’t gain weight and she was so tiny we went from formula to formula eventually 6 weeks later we were admitted into the loma lima hospital, due to failure to thrive, it was very emotional especially being a teen mother and not knowing why my baby girl wasn’t gaining weight. While we were there they tested her on various syndromes and it got frustrating when result after result came back negative…still they had no clue what she had, but because of her appearance they said down syndrome and tested her yet another negative but still they kept testing her for. this was a gruesome experience she looked like there genuine pig, eventually we were discharged with some answers but no syndrome. We continued life like everyone else just helping her with certain things, she wouldn’t crawl and was 9 months old, she was weak yet no worries mommy said when she’s ready she’ll be ready we’ll know! We knew Alexis had an exception yet we didn’t know what and that it would just be a bit longer and for us to wait ! On her 12 month check up was when I found out they diagnosed her she had moebius sequence syndrome I wasn’t angry I was happy now I could put the pieces of our puzzle together and I asked when did u diagnosed? She said in her hospital stay, i was furious because that had been over a year ago, from then on we were dedicated to help our daughter and understand the syndrome. It was hard I would ask the doctor what is the syndrome how did she get it so many questions yet she herself didn’t know, so she printed me a page with 3 paragraphs but it didn’t tell me much I would have to Google it….but Alexis is doing great now she’s going to be three and she’s adorable she was born with an under developed ear, skin tags and fluid in her ears both of her hands/feet are very chubby she had her tongue tied but she had surgery to remove he skin tags, put in tubes to remove the fluid from her ears, and release her tongue. She has delayed in many areas but she meeting  her milestones slowly yet surely. She gets help threw IRC and she’s doing great and soon goes to preschool this august god has been good to us, giving us help and family and friends whom are very supportive and we push Alexis to every limit we don’t give up on her and she doesn’t give up neither, she runs plays and does sign language. she’s a big girl who’s now has company by a little sister I can’t express how much she has changed us for the better. Although many whom have moebius may not be able to smile Alexis was blessed to smile I don’t take that for granted at all, she talks but just a bit due to hearing loss but that doesn’t stop her she is living life with moebius and it hasn’t impaired her to live to the fullest, she’s truly an angel in many ways and is our blessing and she’s very determined to have her way I couldn’t have asked for more. She reminds me what the meaning of unconditional love means and what it means to love with out barriers we thank u all very much sincerely the Ramirez family! 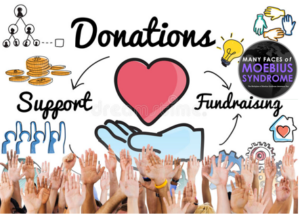 Click here to go to our Donations and Fundraising Page!