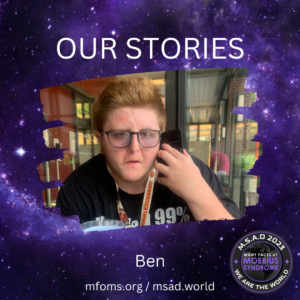 My 2nd pregnancy was uneventful, boring & long and when Ben finally put in an appearance 7 days late on 25th June 2005 everything seemed perfectly normal. A passing doctor remarked that he “looked a bit squished” and at the time I remember thinking that anyone would look a bit squished if they had just made the same journey!!

We came home after only a few hours and introduced Ben to all his relatives.
The next day everything took a turn for the worse, the midwife who conducted his newborn assessment was not happy and wanted us to return to the hospital for some further tests and presented us with a very bleak picture of life to come for Ben. I distinctly recall the words “brain damage” being bandied about.
Those few hours were probably the worst of our lives but after a few solid hours crying myself and my husband, ever practical, got round to planning how to make the best of it.

Looking back I feel grateful to the midwife for managing our expectations downwards – when we returned to the hospital we were so prepared for the worse, the diagnosis they actually gave us was a relief. Their assessment was that Ben had facial palsy caused by birth trauma (although nothing traumatic had occurred) and that it should fix itself within 6 months.

Over the course of the next 6 months there was no change in Ben’s facial expressions and we were referred to Great Ormond Street Hospital where Ben was diagnosed with Moebius Syndrome. We’d had an inkling this could be his problem as shortly before we went my mother-in-law was watching daytime TV and noticed a piece on a child who couldn’t smile. She made a note of the name of his condition so we’d already done some internet research just in case.
The doctor at GOSH wanted to conduct some further tests to rule out any other possibilities so we became regular attendees at the hospital for about the next 12 months and in the end, shortly before his 1st birthday her original diagnosis was confirmed.

Ben progress in the early years were a little harder I guess – he had repeated chest infections, needed assistance with sitting, eating, drinking etc but most of these things he has grown out of.

He started walking at exactly 18 months & 1 day (I remember so well cos it was Boxing Day) and he hasn’t looked back.

Ben is now a happy, little 4 year old boy who tears about the place at 90 mph and who has just started Primary school.

As to what the future holds for Ben – perhaps ironically I can picture him becoming a comedian as he likes nothing better than to do silly things to make other people laugh & smile.