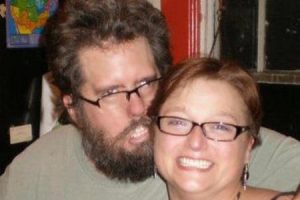 I’m Tina Wilkins, and my husband, Budd Wilkins, was born with Moebius Syndrome. His 40th birthday is July 7. Budd is an internatinally published film critic, and staff critic for Slant Magazine. www.slantmagazine.com

He covered the 2012 Cannes Film Festival in France and a link to his coverage is below.

Budd is a remarkable person. He attended Penn State and graduated from the University of North Carolina at Greensboro in 1999 with a bachelor’s in religious studies, and also in 2010 with a master’s in film studies. He began his own blog. www.buddwilkins.com, devoted exclusively to film, and then was published in the Acidemic Journal of Film and Media in August 2011. In 2011 Budd was hired by Slant Magazine and became Staff Critic in January 2012. He telecommutes from our home in Greensboro, NC.

Budd has written a chapter to be included in the upcoming anthology GLOBAL FEAR: International Horror Directors to be published by Intellect Press. Ltd. and distributed by the University of Chicago Press. He is contributing another piece to Acidemic http://www.acidemic.com/ and has a regular radio spot discussing film on WUAG, 103.1 (wuag.net) University of North Carolina at Greensboro Radio.

Cannes 2012 coverage and other special features from The House Next Door, Slant Magazine’s blog: http://www.slantmagazine.com/house/author/bwilkins/

Our local paper recently profiled Budd and talked about his Moebius Syndrome. The article is here: http://gotriad.news-record.com/content/2012/06/06/article/jeri.rowe_film_blogger_conques

Our local paper recently profiled Budd and talked about his Moebius Syndrome. The article is here:
http://gotriad.news-record.com/content/2012/06/06/article/jeri_rowe_film_blogger_conquers
_his_fear_cannes

Many Thanks for all you do.