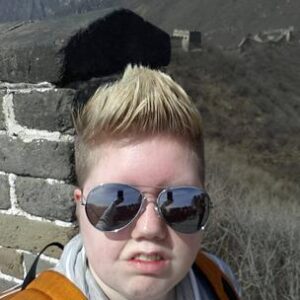 Once upon a time there was a mother giving birth to her child. The doctor told her and the father that it was a girl. As any other parents, they were extremely happy and loved their child very much. They named her Caroline.

Time went on and the Caroline’s parents waited with excitement for their daughter’s first smile. But it never came.

They took her to the doctor and when she was around one year old, she was diagnosed with a very rare condition called Mobius Syndrome.

In Caroline’s case it was very mild and she would not be affected by it much. Although she had a double-sided facial paralysis and would therefore never be able to move her eyebrows, nose and never smile.

As Caroline grew up, she became more and more aware of her condition. She asked her parents about it and when she was eight, she realised she would not be able to smile unless she had the so called “Smile Surgery”.

I remember exactly where I was when I realised this and exactly how I felt. Being only eight years old and realising something like that is devastating.

In school we used to ask each other what we would wish for if we were given three wishes to come true and one of mine was always to be able to smile.

I was so ashamed of not being able to smile. As soon as I laughed, I placed my hand in front of my mouth, so that no one could see it.

One day, in my very early teenage-years, I was searching the internet and came across a website that said “The Swedish Mobius Syndrome Association”. I showed it to my family and a short while later we had become members of the association.

When we went to the annual gathering, for the first time, I was so excited to meet others like me, because I had never done so before.

There was a lecturer there, talking about the smile surgery and I started believing it was actually possible.

One the annual gathering the following year my parents and I were talking to a parent of another child with Mobius Syndrome, who had had the smile surgery done. It turned out that she and I had the same doctor as children and that through her, she had been able to get a letter of referral to a surgeon who performed the surgery.

I knew it would be a several year long process, to get the surgery, with paperwork being handled very slowly and all but I did not care, I wanted that surgery. I asked my father to contact the doctor we had been talking about.

I got an appointment with her, after several months. We talked a bit about why I wanted the surgery done, how it would improve my life, how it had been growing up with Mobius Syndrome and so on. She told me she would give me letter of referral to a surgeon.

I was back to waiting and after having waited for nearly six months, my father called my doctor again and it turned out she had forgot to send the papers to the surgeon. Another few months went by and I got a letter that said that I had an appointment with the surgeon Birgit Stark.

When the day of my appointment arrived I was very anxious to find out if I would get the surgery or not. After talking to her I realised that I would get it, because she had been talking about the surgery, how they would to it and things like that.

I met my surgeon with several times the following months and one day she told me that she would contact a French surgeon, who was a specialist in this kind of surgery. Contacting him took yet another couple of months.

And then finally a sunny day in May 2010, I received one of the best letters I ever have received. I opened it and it said that on the 11th of October I would have my surgery. To even try to describe how extremely happy I was at that moment is impossible.

I had my girlfriend at the time, next to me and I just grabbed her and started jumping with joy and then I jumped around the house for a while. I could not believe I had a time and date for my surgery. In just five months, my dream would come through.

Time passed and all of a sudden it was the day before my surgery. It was time to go to the hospital. The surgery would be very early in the morning, so they wanted me to come in the night before to get prepared; draw the markings and such on my head and face.

Once there I got some food and later I met the French surgeon, who had flown to Sweden just for me.

After just a few hours of sleep it was time to wake up, take a shower with a special kind of soap and get dressed. When I had done so, I was taken up to the recovery room to wait for someone to come and get me. I was given a pair of very long socks and after putting them on I was lead into the operating room.

It was a very strange feeling, walking into a room where you know your life will be changed dramatically. I lied down on the surgery table and then put a warm blanket over me. They gave me a shot, containing what I can only assume was the thing that would make me fall asleep because I remember them asking me if I was feeling sleepy, and I did. I felt a bit drowsy and I know I was thinking something similar to “I’m going to fall asleep soon”.

The next thing I remember is waking up, after what seemed to be only a minute but was in fact at six hours later, being in pain and feeling very nauseated. The nurse gave me some medicine to ease the pain and a few minutes later my parents stepped into the room. They were shocked when they saw me. I was very swollen in my entire face and I had a bandage around my head which was as big as a football.

I had to stay at the hospital for a few days and then I was told to stay home for a few weeks.

It is today just a little bit over a year ago, since I had my surgery and my life has changed and especially improved very much. I have grown a lot the past year and with that I have learned a lot about myself.

Going through pain, nausea and so on – it was all worth it, without a doubt.

Even though not being able to properly smile yet, without it looking weird, I am so happy I did it. Just the fact that I am now able move my cheeks, is more than I could ever dream of. This is really a dream come true.