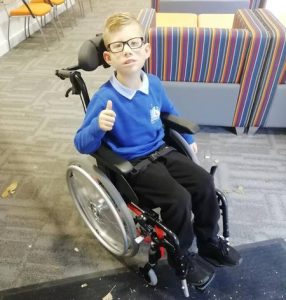 This is Cody. After many miss diagnoses Cody was diagnosed with Moebius Syndrome at the age of 6 months after many complications straight after birth, they kept telling me ‘ we no something is wrong with your son, but we’re not 100% sure yet’ After his diagnosis we was told Cody would not be able to walk, talk , or have any quality of life. I felt like my heart had been ripped apart. Why us? Why my son? My world had fell apart, how was I going to cope with a child who had to rely on me for everything when I was only so young my self , I did. You always do! Your children always come first –  but how wrong was the ‘professionals’ !! Cody is the most caring, beautiful, funny and outgoing little boy I have had the privilege of knowing , and hes mine. Never have I been so proud of everything this little boy has achieved, specially after being told he wouldn’t meet his milestones. We was told he wouldn’t attend a mainstream school – he does and he is on target with his subjects and has an amazing network of friends , he’s very popular! Cody has undergone facial reconstruction (smile surgery) , heart surgery, eye surgery, jaw surgery, and many more, he has spent his life in hospital and has had more appointments than I had hot meals , but he does not let this stop him. He suffers with seizures that at yet to be diagnosed. He has a pacemaker in place as his heart has stopped  several times. He has no peripheral visions, no 3d vision, lack of perception and uses a Cain and wheelchair to get around when he’s tired. He has many sleep  conditions that he has had case studyies on due to the rarity of these. They have never seen this condition in anyone before! He Suffers with the  typical Moebius traits , with all of these issues he lives his day to day life with out a care in the world (mummy struggles more!!)Cody has dealt with more in his short 7 years of life than some people do in a lifetime, but with his cheeky personality and his way of dealing with things you would never no. I’m in awe of him , as are many other people. Cody loves playing with his friends and really enjoys roll play and dressing up. He absolutely loves singing and will sing him self out of any situation – even when he’s been naughty! He once said to me “if anyone laughs at my face , il just sing ‘im sexy and I no it”  from that moment on I knew my son will always be one step ahead. He leads a normal life considering how much he has been through. My favourite saying is always ‘never judge a book by it’s cover’  Cody is my moebius warrior. My hero. Always [

The Day We Found Out Me And My Partner Was Expecting A Baby Was The Happiest Day Of Our Lives. Not For One Minute Did We Think We Would Have A Poorly Child. We Had A Emergency Scan At 5 Weeks As I Was Having Severe Pains, Nothing Was Picked Up At The Scan. We Had Our Usual 12 Week, 20 Week, And 36 Weeks Scan, And Again Nothing Was Picked Up. I Finally Gave Birth To Our Beautiful Son Cody On His Due Date The 8th Of April At 2:40am. I Had A Natural Delivery. When He Came Out He Didn’t Scream/Cry, We Panicked. Finally We Heard A Little Cry, A Sigh Of Relief Rushed Through Me. The Midwife Put Cody On My Breast Straight Away, I Thought It Was Weird That He Couldn’t Latch, I Kept Saying ‘ He’s Not Sucking ‘ But No-One Listened. I Was So Tired I Gave Up, We Tried Him With A Bottle But Still Nothing Was Happening. We All Put It Down To Him Being Tired. An Hour Later We Tried Again, And He Was Still The Same. The Doctors Jus Kept Telling Me To persevere. I Remember Them All Talking, But I Was Tired I Couldn’t Take It All In. Later That Day We Seen A Specialist, And He Said Cody Jus Had Nerve Damage And It Would Repair Its Self In Time, So We Went Down To The Ward Thinking Everything Was Fine. My Family Left And I Started Bonding With Cody, He Was Due A Feed I Remember Sitting There For About 2 Hours And He Hadnt Took Any Milk, I Called The Nurse Over And She Had A Go, But He Was Still Not Sucking. He Then Projectile Vomited Everywhere. The Nurse Left To Go And Speak To The Doctor In Charge Then All Of A Sudden About 4 Doctors Jus Came Into My Cubicle And Said ‘ Everything Will Be Fine’ And Took Cody Off Me And Took Him Straight To Neo-Natal. My Heart Broke, I Didn’t Know What Was Going On, How Comes Everyone Else’s Baby’s Were Fine, And Mine Wasn’t. The Nurse Came Back In And Told Me To Get Some Rest, All I Could Hear Was The Other Baby’s Crying, I Cried My Self To Sleep That Night. I Woke Up To More Crying Baby’s, I Waited For My Partner To Get There And We Went Straight To Nea-Natal To See Cody, He Had A Feeding Tube In, And A Few Wires Hanging Out, I Didn’t Have A Clue What All This Was For. I Asked If I Could Hold Him, But I Wasn’t Aloud. I Stared At Him For Hours Holding His Hand. I Just Kept Asking My Self WHY? Why US? After A Few Hours Whic Felt Like A Life Time The Doctor Did His Rounds And Said The Same As Everyone Else ‘Cody Has Nerve Damage, And It Will Repair Its Self’ …. 10 Days Later He Finally Came Back To The Ward With Me. I Got Discharged And Sent Home With My Gorgeous Little Boy. He Was Still Projectile Vomiting And Still Couldn’t Suck So We Had Cleft Pallet Bottles To Squeeze His Milk Into Him, It Could Sometimes Take A Few Hours To Feed Him, I Was So Tired, It Felt Like I Was Always Feeding. In Time We Noticed His Facial Palsy Wasnt Getting Any Better, He Wasn’t Supporting Him Self And He Wasn’t Smiling. We Had Weekly Checks With Our Midwife Who Then Referred Us To A Specialist, He Tested For Lots Of Things Including Prada-Villie Wich Came Back Negative. We Went Home Thinking Maybe He’s Jus A bit Slow …. In No Time He Was 5 Months Old, We Went To Our Eye Appointment Expecting Nothing, When Really We Came Out With Cody’s Diagnoses Of Moebius Syndrome. Again All I Could Think Was Why US, What Have We Done To Deserve This Rare Awful Congenital Disorder, Still To This Day My Heart Breaks That Il Never See My Son Smile At Me. We Now See, A Pediatrition, A Neuroligist, Speech And Language Therapist, A Dietision, Genetics Team, 3 Different Eye Specialists Physiotherapist,Occupational Therapist And Play Therapys. Cody Is 9 Months Old Now, He Doesnt Sit Up Or Crawl But He Does Roll , And Has One Cheeky Personality, Even Though He Doesn’t Smile We All Know Hes Happy With His Dirty Cheeky Little Laugh Hes Making So Much Progress, Everything Cody Does He Has To Work 10x Harder For! I Will Keep Updating My Story To Let Everyone Know How My Little Moebius Munchkin Is Getting On.