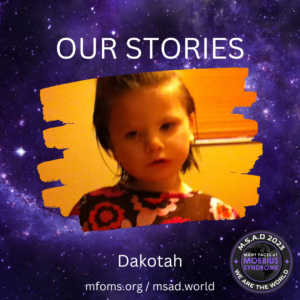 Dakotah was born on October 15 2008 via an emergency C-Section. I was my daughters birthing coach. On October 15th we checked in for what was to be a normal delivery. After 15 hours in labor and Dakotah’s heart rate dropping several times over the course of the day it was decided that a C-Section was necessary. When Abbie was taken into the delivery room I sat patiently by her side and watched and they worked on her. The Dr. was having a hard time getting Dakotah out, her head was stuck in Abbie’s ribcage, she was breach. Out comes this beautiful baby with tons of black hair. She was very quiet and didn’t cry. As they took her over to check her out I noticed that her eyes were extremely large and that she just stared, she didn’t blink at all. I noticed that her lip was droopy as well. The doctors checked her heart and did the basic APGAR tests that they do on a newborn but that was about it. Abbie and Dakotah were taken into the recovery room. While in recovery we tried to get Kotah to latch on, she was unable to do so. I started looking at her mouth and noticed that it did not open very far, almost as though her jaw was locked.

Concerned, I said to the nurse that something was wrong with her. She gave me the usual response of “she’s fine, she just doesn’t want to eat,” having 4 children I didn’t think that was the case. I requested to see the Physician on staff. In speaking with the Physician I let him know what I had observed as well as the fact that she was 9 hrs. old and had only taken 1 ML of milk from the bottle. As I explained what I saw he asked at that time if I had ever heard of Moebius Syndrome. I of course, had not. He explained that he did not know much about it but what I was describing were the classic symptoms of the syndrome. Dakotah was sent to Children’s Hospital of Cincinnati the next morning. By the following afternoon Dakotah had been diagnosed with Moebius. We had prepared for the possibility that she would have Spinal Bifida because Abbie did not produce B-12. When we received this diagnosis we were devastated however I feel that God was preparing us all along for this. We were prepared for one diagnosis and received another.

Dakotah spent three weeks in the high risk intensive care unit at Children. An NG tube was put in place and she was monitored. My husband and I were in a learning curve, this was all new to us. We learned how to place an NG tube, how to check for placement, how to feed her and how to administer medication and dosages. We learned how to put lubricants into her eyes so they would not dry out. We were receiving a crash course in how to take care of her. My daughter was unable to handle Dakotah’s disability at which time she decided to let her father and I adopt Dakotah as our own. We brought her home Nevember 7 2009. We were a little nervous to say the least, we were no longer going to have the doctors and nurses to help us. We did just fine, Dakotah adjusted beautifully. Our new life had begun. Pur life became a series of doctor’s visits, hospital visits and specialist visits. Dakotah continued continued to grow. On Feb 6 2009 she had the NG tube removed and a G-tube put in. She adjusted beautifully, After a two day hospital stay we were sent home. After we came home she was having fevers, it was discovered that she has an enlarged bladder that was not emptying properly. She was given a round of antibiotics and is monitored every three months with a cystogram, we are hopeful that she will grow out of this problem. On April 16 Dakotah had eye surgery to correct her eyes. They look beautiful, they still cross when she looks up but we are currently patching so hopefully over time that help as well. She did so well that her G-tube was taken out on July 17, she had learned to master the Habermann.

Since the G-tube removal Dakotah has grown and has been exceeding all of her doctor’s expectations. She is thriving. Currently she is in the 99% for her height and weight. She attends Occupational, speech & physical therapy every two weeks right now. Eventually it will go to weekly visits. She has mastered sitting up but she still cannot roll. However, in saying that this past Saturday night she rolled two times from her stomach to her back. It was such a celebration. In the last week she has learned to take her milk and juice from a sippy cup, she can’t suck but she has learned how to get it out on her own, the was another celebration. She still cannot chew, we are working on that in Occupational therapy. dakitah is the most beautiful little girl, she is so smart, and you can tell she is working it out in her head. Her laugh is amazing and so is her spirit. She has mastered saying “da da”. She has endured so much and doesn’t seem to be phased at all by any of it. Each day she grows a little stronger and is able to do more. I have never had a disability in my family, that being said, we have learned that you cheerish and value the small milestones that happen along the way, they are the stepping stones to the future. We love and adore Kotah and are blessed that God brought her into our lives. Dakotah will celebrate her first birthday on October 15, 2009, we are so excited as we have so much to celebrate and be thankful for. She is a gift to us and to the rest of my family. She is the center of our world.