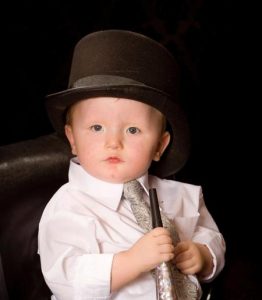 It’s a disorder that’s so misunderstood that its victims are often mistaken for being unfriendly or even rude, but it’s something they can’t help.

It is the reason why the mother of one young patient was speaking out on Wednesday to shine a light on Moebius Syndrome.

At first, when you hear and see Dylan Gentry cry, he seems like any other child. But when he takes his hand away from his face, it’s clear that something is different.

That’s because Dylan can’t smile, frown or blink. So, when he cries, it seems like the sound is coming from a different child.

But, make no mistake; Dylan is just as unhappy about seeing his doctor as other two-year-olds are about seeing theirs. He just happens to suffer from an extremely rare neurological disorder called Moebius Syndrome.

Dr. Farha Khan, a pediatric neurologist at Lutheran General Hospital in Park Ridge said that, because people with Moebius Syndrome can’t display emotions the way the rest of us can, it might appear that they aren’t feeling those emotions.

“They are, which you could see when we examined Dylan. His face turned red. He felt the emotion. He just couldn’t express it with his facial muscles,” Khan said.
That’s because Dylan’s facial muscles have been paralyzed by Moebius Syndrome. Dylan is one of about 20,000 people across the world afflicted with the genetic disorder.

Dylan’s mom had never heard of it until her son was diagnosed. Knowing Dylan will likely never blink or smile back at his brother or sister is heartbreaking for her.

But the emotion that’s most powerful for her these days is fear; fear that her child will be misunderstood and mistreated. That’s why she’s going public for the first time about his condition.

“I want people to know what it is and not to judge people just by the way they look,” Andrea Gentry said. “Because he doesn’t smile, he doesn’t frown, he doesn’t have any facial expression. And you’ll look at people and you’ll think that they’re being rude or there’s something wrong with them. But there’s not, they’re just the same as you and I.”

Khan said she thinks awareness of Moebius Syndrome is the key. That way, Moebius patients won’t be judged by how they seem, but rather how they are.