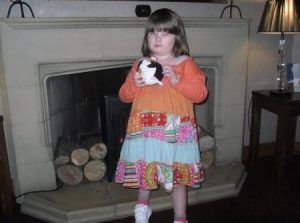 The time had finally arrived…..labour pains kicked in on the night of sept 10th 2005.……a moment I had longed for as I was unable to conceive for the 5 years prior to this and had lost a baby a few months before I fell pregnant with Erin at 8 weeks gone……needless to say I panicked through my pregnancy if she didn’t kick enough so I was a frequent visitor at the neo natal unit to get scans to check that all was ok….which it always was…nothing out of the ordinary was ever spotted during my multiple scans (about 10 in total through my pregnancy) so I was not prepared at all for what was to follow…..

After 23 hours of gruelling labour my darling daughter was finally born…..they showed her to me straight away and her face looked so perfect!! But instead of immediately giving her to me for the important “skin to skin contact” they had advised me of, they whisked her over to the table with the bright lights shining on her and she was surrounded by doctors and nurses…..the midwife assured me they were just checking her over and I was happy with that, she was then placed against my skin so I could look at her.  The mid wife then informed me of her little clubbed foot, and also the top of her ears appeared not to be fully formed yet (they hadn’t curled over at the top and were sort of flat)..I was very overwhelmed by what they were telling me but I just couldn’t take my eyes away from this beautiful baby girl I had created and who lay so peaceful and ever so quiet in my arms……

That first night was pure bliss….she didn’t cry at all…..I had a doctor visit me to advise me of how they can easily rectify her foot (wasn’t easy at all!) but it wasn’t until the morning that I realised I wasn’t able to get her to take much milk……the nurses got on board to help me with feeding her….even attempting to pour milk into her tiny mouth…..the worry set in…..and the tears started to flow, as they advised me they would need to take Erin to the Special Care unit to get her tube fed, again they made light of it so as not to worry me, but when they took me to see her shortly after, and I saw her lying helpless in the incubator with a tube down her throat, I felt myself go faint and they had to help me into a chair….I was overwhelmed with love for this tiny precious girl and the anxiety was crippling……..

I returned to my bed as I couldn’t walk or sit due to several 100 stitches and the nurse came to see me and gave me a Polaroid picture of Erin to set on my bedside table……that night was the longest night ever…..as all the other new mums lay with their babies safely in their cots beside them, all I had was a photo…..and my mind frantically started to worry as to what was wrong with her!

I made many visits to the Special Care unit that night, just so I could watch her sleeping peacefully…..

Erin remained being tube fed for over a week but I was able to nurse her as often as I liked and I remained in the hospital so I could see her whenever I wished……but eventually between the nurses and I, we worked out how to feed her with a bottle that had a large teat and by manipulating our fingers on her cheeks to create a vacuum, she was able to suck and drink! They said that as soon as the results were in and she was able to take a full bottle with my assistance she would be able to come home.

One morning a Dr came round to tell me they were going to do chromosomal tests on Erin to rule out any syndromes and it would take 5 days for the results…..I was in total shock……still at this point I hadn’t even noticed that her little face didn’t move……I had just noticed that her mouth appeared to sag down at one side when she cried (which was rare).  The nurses said they had noted it and the Doctor would speak to me about it once the test results were in……

5 days later the results were in…..I was racked with anxiety!  But the nurses told me that it was good news so try not to worry…..relief flooded over me at her words!  They said that she tested negative for any syndromes they had tested her for!

Had meeting with the Consultant Pedeatrician later that day, who advised me that they thought Erin just had a case of facial palsy which should clear up on its own in a matter of months and that she had been referred to orthapedics to start serial casting her club foot as soon as possible…..and she was happy for me to bring her home…..

Before I left her office she did mention that I would be sent out a routine appt with a geneticist….this set alarm bells ringing in my head, but she assured me that it was just a routine appt due to her having the chromosomal tests…..

So 2 weeks after Erin arrived I was able to take her home…..I was absolutely elated, but the anxiety never went away……feeding her was a massive chore as it took so long just to get a small amount of milk into her…..this got easier in time……and then the appt arrived to see the geneticist…..

Off we went to, what would be the start of many appointments to come….the Geneticist was a nice lady.  The first question she asked me was, what was does Erins face do when she cries?  I didn’t know how to answer her……she then did something called a drop test that prompted Erin to cry.  She then gave her back to me and told me that Erin has Moebius syndrome.  I wasn’t prepared for this as I was so sure she didn’t have any syndrome!  She didn’t seem to know much about the syndrome other than telling me that her face was paralysed and it may or may not start moving, she wasn’t sure as there was so little known about it.

After this Erins treatment for her club foot began (Ponsetti method was used), plus endless appointments with every type of Dr imaginable……the one that upset me the most was when they were checking her sight and the doctor told me she had no lateral eye movement.  Another huge shock as again, I just hadn’t noticed!

I didn’t dare go on the internet for fear of what I might read, and just kept hanging onto the hope that one day, my sweetheart would break into a smile……

The next few months past in a blur of appointments and different therapies being set up……at 6 months old she started Speech therapy, physio and Occupational therapy…..

Life trundled on and Erin, though late, eventually reached her milestones……she took her first steps at 15 months old!! A moment etched in my mind forever! I eventually ventured onto the internet after reading an article about a lady called Dionne in Scotland who’s little boy also had Moebius syndrome and she was starting a charity and website to raise money for research.  I rang her straight away, and it was so amazing to finally speak to someone who knew so much of her condition and who could relate to everything I felt and thought!  Dionne went on to set up the Moebius Research Trust….and their online forum became invaluable to me, as more and more members joined, suddenly I felt much less isolated as there were so many other parents going through what I was…..

Erin was also diagnosed with Autism at aged 3, but luckily she is on the high functioning end of the spectrum, and she can read at the level of a 9 year old! Erin turned 6 last September.  She attends a normal mainstream school but has a full time assistant to help her, mainly for her mobility issues as she has problems with depth perception and low muscle tone…

Life has been an absolute blessing for me since I had my darling Erin, though the road has been an emotional one, she has brought me more happiness than I ever thought possible…