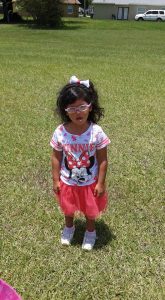 I was a 20 y/o newlywed when I found out I was pregnant. I was so scared yet the happiest women alive. Everything was going perfectly fine untill my 20 weeks sonogram. That day we found out we were having a beautiful little girl and a few minutes later a doctor telling us we should terminate the pregnancy, something no mother wants to hear. He then told us that she had gastroschisis, club feet and a cyst in her brain and that most likely there was something very wrong with her but for us she was as perfect as they come and here to stay.  However, we did wanted to be prepared for whatever it was that was coming our way so decided to get an amniosistesis done to have as much info as we could before her arrival but it came back negative and the waiting game began. On July 21st, 2011 I went to my weekly appointment to check on my last ultrasound. Before I knew, the appoinment was over and I was looking forward to the week after when I was going to be induce. When I was about to walk out the door a nurse called me back in to ask me if her liver was outside her body, which i had no idea, because there was nothing on my record. The doctor then decided to get one last ultrasound done to make sure there wasnt a change of plans since I would have had to get a c-section if her liver was in fact outside her body. Good news was that her liver was inside her body but only to find out that she wasnt breathing and skiping heartbeats. Next thing I knew I had a whole bunch of nurses on me hooking me up to different machines and waiting on an ambulance to take me to the hospital. A couple of hours later my baby girl was born. Definetely the most stressful experience Ive ever been thru but it all went away as soon as I heard her cry. I was so overwhelmed with love and happiness but that didnt last long, I knew something had gone wrong. The doctor put her in my arms, asked for a camara to take a family picture and quickly took her to another room without even being able to get a good look at my own daughter. My husband followed the doctor and I didnt heard from them for several hours. When my husband finally came to the room, he told me she was on surgery and then going to the NICU. We were not allow to go visit her and still no update which naturally got us worried. When they finally gave me the OK to go see her, more than 12 hours later, what happend I will never forget. I came in and held her tiny little hand but within a few seconds I heard the long loud beep of a flatline coming from her monitor and my heart sinked. I was so confused but soon realized what was going on. A nurse rushed me out of her room and I dont remember much after that. I later found out a nurse had accidentaly overdose her with morfin and her 4 pound body didnt take it. The next day wasnt much better, thats when the doctor came in and told us about moebius and the geneticist gave us the whole “she wont be able to do this, this and that” speech. At that point I was sure the pain I was feeling would never go away. Someone telling you, you would never see your child smile was definetely a hard pill to swallow. She spent the next 2 1/2 months in the NICU recovering from surgery and trying to get her to eat without having to put a g-tube on her. As happy as I was to finally be able to bring Gabby home, being a first time mother, I was scared out of my mind. The first year was one full of tears, frustration and delayed milestones. I also feel I wasted so much time grieving over the things I didnt get to do as a first time mom, that I forgot to enjoy the perfect little baby I had in front of me. Fast forward to 28 months, now my biggest regret is NOT enjoying every single second of this crazy beautiful ride. She has had a couple of surgeries, few hospital stays and countless therapies but she is the happiest baby I know and that makes it all worth it. She is a smart, silly, outgoing, beautiful and overall amazing little person and I wouldnt change her for the world. YES, it is hard at times but then again thats just life and it DOES get better.