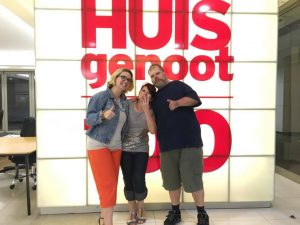 ‘The only problems I have are because of how other people perceive me.’

Mar 21 2008 by Rebecca Edwards, Chester Chronicle && ‘The only problems I have are because of how other people perceive me. Last week The Chronicle featured 11-month-old Isaac Hughes who has Moebius Syndrome stopping him from making facial expressions. Reporter REBECCA EDWARDS talks to a Bank of America worker with the same condition
Gareth Roberts first saw the effect of Moebius Syndrome on his own face when, as a teenager, a Match of the Day camera caught him in a football crowd. The 25-year-old Bank of America worker said: “It was a weird experience. I looked at myself jumping up and down and knew I was excited but I had a bored face. I realised this must be how other people see me all the time.”
Like baby Isaac Hughes, who was featured in last week’s Chronicle, Gareth has Moebius Syndrome which stops him smiling, moving his face or closing his eyes. But he says his biggest annoyance in life is not his medical condition – just other people’s reactions to it.
Faced with his neutral expression, strangers stop him in the street to say: “Cheer up, it might never happen.”
Other people repeatedly explain jokes to him, thinking his non-reaction means he didn’t understand although inside he is laughing. Gareth, of Penyffordd near Broughton, met Isaac’s parents Ceri and Philip, formerly of Chester, last week to discuss the reality of growing up without the sixth and seventh cranial nerves, which control facial expression. The rare condition is thought to affect only 200 people in the UK and there is no known cure.
There are no Moebius specialists and no research has yet been done into its causes or even the scope of its symptoms. Gareth says: “I view myself as normal, I can do the vast majority of things. The only problems I have are because of how other people perceive me.

“I know why people react the way they do, but I would like them to consider that if they don’t get the response they expect from someone, there might be a number of reasons behind it and they won’t necessarily be negative.”
He adds: “People take smiling for granted just like breathing – it is such an automatic response to things.

“At Bank of America they treat me the same as anyone else, as long as I can do my job they are happy.

“As you get older you just learn to adapt and use the tone of your voice and your hands to express yourself instead.

“If I bite my teeth together I can make my mouth turn upwards which is okay for photos but I couldn’t do it all the time.”
Gareth’s parents Judith, a special needs support worker, and Brian, an accountant at HBOS, first noticed something was wrong when their baby could not suck milk.
On the advice of a veterinary nurse friend, they fed him with a lamb’s bottle with an extended teat and pump.
At three months old, Gareth was diagnosed with Moebius Syndrome by the GP in Kinnerton, where they then lived. He took longer to learn to speak and walk but had no extreme symptoms and, without the internet to introduce them to other Moebius families, Judith and Brian decided to “just treat Gareth as Gareth.”
He went to Penley High School until his mid-teens, when they moved him to Oswestry School where they felt he could have more support. Judith said: “I did worry about him being bullied, but I admire the way he doesn’t let anything get him down.” Gareth adds: “I don’t want it to define me. I would never meet someone and say, ‘hi, my name is Gareth and I have facial palsy.’ I just slip it into the conversation where I can, and a lot of people just say they thought I was bored.
“Generally though I don’t think it has affected the decisions I have made in my life. You have got to look on it from a positive perspective, you can’t go around feeling sorry for yourself.”
Gareth and his family are now joining Ceri and Philip fundraising towards the Moebius Research Trust’s target of £250,000 for a research programme into the causes of Moebius.

Judith says: “You always blame yourself and wonder if it might be something you did, so I would like to know why it happens and whether it runs in families.”
After Gareth showed his colleagues in the Fraud Department at Bank of America the article about Isaac, they produced three Easter hampers as prizes in a raffle that raised £150.

He said: “I was really touched by that, they never treat me any differently but it was good to go around selling the tickets and explaining about the condition to people.
“I would like to take part in some of the research because I am as curious about the condition as everyone else.
“But if they came up with a technique to change it I couldn’t see myself taking it up because there will never be an operation to make my smile as natural as anyone else.

“What’s the point of going through that just for a limited ability to smile?”