Harrison Moebius Syndrome: Harrison Paul Lowry was born on the 22nd of April 2010; it was an incredibly exciting time, as we finally got to meet our new little man.  He was beautiful!!!  The peadiatrician was slightly concerned with his breathing after he was born, and asked the nurse to keep a close eye on him.  We spent an hour or so in recovery and then we were taken up to our room, within minutes of us being up in the room, Harrison went an extremely scary shade of blue, and needed to be resuscitated ……this was the start of a 15.5 week journey in hospital and us seeing him go blue many times, and requiring resuscitation many times.

Harrison was born with an under formed tongue and a talipes on his right foot and a recessed chin, (pierre robin).  Due to the amount of tubes and tapes over Harrisons face, it was 8 weeks until Harrisons paralysis to his face was picked up and diagnosed with Moebius syndrome.  It didn’t make sense initially as Harrison smiled, but it soon became apparent that he was only smiling on one side of his face.  After 8 weeks of the unknown, it helped to put a name to Harrisons condition.  To be honest, it was hard to accept at first that my child wasn’t “normal”, but in reality what’s “normal”, I don’t think it was the fact that he had Moebius syndrome, but how were we going to look after him that really scared us.

When Harrison was born, I was able to hold him, but this was the one and only cuddle I got for the first 2 weeks of his life.  At one week, I was able to lift him while the nurse changed his sheets…is hard to explain how much of an important step that lift was…it was not a cuddle, but a LIFT…..but it felt amazing!!!!!  After about 2 weeks, we were able to nurse him. But this was extremely orchestrated, as he had so many tubes attached to him, so it took a team of about 4 people to move him so that we could get a cuddle….and god it was an amazing cuddle. So its fair to say, that every cuddle from Harrison to this day is cherished!!

The first 11 weeks of Harrisons life was extremely scary, as he would de-sat on average 10-15 times a day, and the longest time without breathing was for 3min and 46 secs.  So I think it is fair to say that we were absolutely petrified that one day we would arrive at the hospital for them to tell us that we had lost him.  But thankfully we have a little fighter.

Within the first 24 hours of Harrisons life, he was fitted with a Nasopharyngeal tube (to breathe), as Harrison couldn’t breathe on his own, and a Nasal Gastric tube (to feed), as Harrison used to aspirate.  He was connected to C-Pap and had tubes everywhere, this was the beginning of a life of tubes for our little man.  At a very early age our little man, became very good at pulling these tubes out, especially at 2am in the morning, hence the nickname of the time of Harri Houdini!!!

Thankfully we were at the amazing Mater Mothers Hospital, in Brisbane, Australia, and we were surrounded by fantastic doctors, therapists and nursing staff.  Harrison had his first operation when he was less than 24hrs old, and his first speech therapist when he was 4 days old. (this was the start of many operations and therapy treatments). He was very spoilt with attention, he had a team of 8 specialists and 4 therapeutic streams that looked after him, and a massive team of nurses that nursed him and still remember him to this day.

Harrison spent the first 11 weeks in NICU (Neonate Intensive Care Unit), then at 11 weeks he was intubated via a tracheostomy, although at the pre-op meeting, with many DRs and Specialists that had been involved with Harrisons, it seemed the opinion that were not convinced the trache was going to work for Harrison. I was, as we really had no other option, so it had to work!!!!  And it did!!!  It sounds crazy to say now, but Harrison getting a tracheostomy was one of the best days of our lives……our little man could breathe!!!!!!! And this was a huge step towards getting him home!!! We required trache training to get our little man home, this was a 4 week process, but we couldn’t learn fast enough.  During this period we were also concentrating on getting Harrison to eat orally. Tests unfortunately showed that he was still aspirating, and we were told that he may never eat ,drink or talk.  This was gut wrenching, I was devastated, my first thoughts were “Harrison won’t be able to have a beer in the pub with his mates”……sad but true, I was thinking of his social experiences 18 years away……..at least I was able to think about him turning 18!!  It also meant that I may never be able to have a normal conversation with my son, a devastating thought.

We finally got our little man home at 15.5 weeks, and this was an exciting yet scary times……
I questioned how well we slept, for those of you who have never met anyone with a trache, they are very hard to hear breathe, they require A LOT of suctioning and if the trache comes out or completely blocks, it requires changing ASAP.  So it was an extremely stressful yet an amazing time.

It took months before I would go out anywhere on my own, trips to the shops were an all day experience, as someone (usually my mum) would have to come over and drive/or sit in the back to suction Harrison, just to go for a 5min drive to the shops.  It took months before I was able to go anywhere on my own, and it was an effort involving a suction machine, feeding machines and sometimes an oxygen tank.

In this time, our little man took everything in his stride, he was amazing when it came to operations, tubes being stuck down him, he never complained and still to this day is absolutely amazing.  Harrison has spent over 20weeks in hospital, and will be having his 9th operation in mid February.

After many Speech theraphy sessions, it was encouraged that I started to teach Harrison Sign language, as there was no guarantee that he would talk, or how clear his speech would be.  So at 12months of age, I started to learn and teach Harrison sign language.  By the age of 2years Harrison had between 200-300signs and it was his main form of communication. His speech has really improved although unclear at times, so sign is still a major form of his communication.  I highly recommend teaching young ones sign, as this really helps with their frustrations when they don’t have all the words to explain what they want.

In November 2011, Harrison was for decannulated. He was finally big enough and strong enough to breathe on his own and his trache was taken out, this day was wonderful, to see him successfully graduate from having a trache.

This was the start of many amazing steps in his life.

Harrison started crawling at 14 months of life and walked until 21 months, he still wears his boots and bars at night to assist with his talipes.  Although he was a late walker, he has definitely made up for it now, and runs comfortably along beside his mates.

In April 2012, Harrisons trache hole was closed over, and for the first time in his life he was able to talk and make sounds.  Speech has been difficult for Harrison, but for anyone who knows him, they know how determined and amazing he is, he will communicate one way or the other.

In May 2012, it was confirmed that Harrison wasn’t aspirating anymore and meant the process to wean him off his feeding tube could began, through the hospital.  Due to his inability to close his lips and the little movement in his tongue, at the end of the 4 week intense wean process, it seemed that although progress was made, he could still only manage a couple of teaspoons of food. It wasn’t that Harrison didn’t want to eat, he just didn’t have the skills.

Although Harrison did enjoy himself, as the hospital made the process fun for the kids, the wean process was extremely stressful for us parents. We were basically reducing his tube wean foods to nothing, starving him to get him to eat (GRAS method), it was a pretty awful and stressful process.  However, on the final day of the months wean process, I showed Harrison how to use his teeth to get the food off his spoon…………WELL he has never looked back!!!

At the beginning of the wean, we set the goal for Harrison to be able to eat a container of yoghurt, and be able to have a snack at school with his mates. aAnd just a few days later, Harrison far exceeded our expectations and he now eats everything that we put in front of him!!!  Literally everything, it is amazing to see how well he has done!!!  He will now be eating sandwiches at school with his mates at lunch, along with fruit, biscuits etc.  We still have occasional issues with choking, but Harrison manages it really well, and we always make sure we are close by when he eats.

Harrison is incredible, he is an amazing determined child, he has never ever said that he can’t do anything, he gives everything a go.  He has never whinged or complained about his hospital visits, or theraphy sessions, its just a way of life for him.  He never complains when we put his boots and bars on at night.  He plays beautifully with other children although his speech may not be understandable, and it doesn’t seem to phase him.  We are so fortunate that he is only paralysed on one side of his face, as we get to see his wonderful amazing one sided smile….it just makes his smile even more special.  Although, we can see him smiling at us through his amazing eyes too!!!

We wouldn’t take the Moebius out of Harrison for anything, as he wouldn’t be our Harrison, I’m not saying that Moebius defines Harrison, but it definitely influences the strong beautiful amazing child that he is today!! We are so proud of our little man and the tough journey that he has overcome, we “love our little man to the moon and back infinity times”….and even more so, now that he can sign or say it to us. 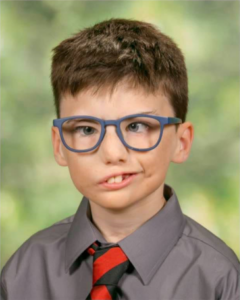 Click here to go to our Moebius Syndrome Awareness Day