The concept of a worldwide Moebius Syndrome Awareness Day in which people are encouraged to wear purple and spread awareness about the syndrome originated from the MFOMS (Many Faces of Moebius Syndrome), an organization run by Tim Smith from Virginia, USA, Gavin Fouche from Cape Town, South Africa. Smith and Fouche have Moebius syndrome. Most of their organization and preparation for the event is done through social media platforms such as Skype, Twitter and Facebook. Smith and Fouche have never physically met, but both share the same passion for spreading education and awareness about Moebius syndrome which will enable those affected by it to lead better lives, they believe.

The initial idea was pitched to Smith by Donnie Downs, a father of a son who is affected by Moebius syndrome. They started a cause page to see if the global Moebius syndrome community wanted their own awareness day. Over two hundred people joined the cause in it’s first week.

“We knew we had a hit on our hands,” says Smith.” But we also knew that we faced an uphill challenge in making it happen since we did not have any money to promote an awareness day.” In the late winter of 2010 they created a video of the climb they were about to undertake. “It was very rewarding to see people sharing it.” says Smith. By the start of MSAD 2011 six thousand people had joined the cause and said yes they wanted a Moebius Syndrome Awareness Day.

During the first MSAD an Australian television network ran a story on a boy named Jack Lawrance who had Moebius syndrome which was then picked up by news media outlets in the United States and around the world causing an unbelievably large number of hits on the original MFOMS website in its first 24 hours. “It was quite surreal to see words that I had written appear in an American newspaper on the other side of the world.” Says Fouche.

Each year, from November to January, the MFOMS runs their Moebius Syndrome Holiday Heroes campaign which highlights those who are affected by Moebius syndrome.

“It’s all about spreading awareness. Anyone can participate. People can do something simple like pass out flyers or wear purple to show their support.”

“Moebius Syndrome Awareness Day has become more successful than I ever dreamed possible. It took off like wildfire and spread right around the globe. Each year it gets bigger and bigger and more people get involved,” Says Smith.

If you would like to make a donation or do a Facebook Fundraiser for the Many Faces of Moebius Syndrome please visit our Donations and Fundraiser page. We are an all volunteer 501(c)(3) nonprofit. Your donations are greatly appreciated and go a long way in helping us carry out our mission. 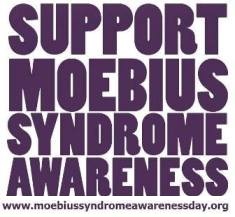