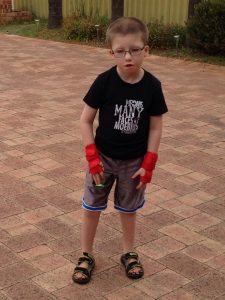 This story was pubished by Take 5 magazine in Australia. As told by Astha Gupta.
Linda Lawrance Jack’s mum gave us permission to use the story.

To distract myself from my next contraction, I turned my head and admired the large framed photo of a happy baby hanging on the maturnity ward’s wall.
“Look at the picture.” I said to my husband Jason. “We’re going to have a baby of our own soon. I can’t believe it.”
On June 23 2007, Jack was born.
Before the birth doctors detected Jack would be born with club feet, but now looking at his cute eyes and button nose I thought he was perfect.
Doctors said that, apart from his foot condition, Jack was a normal, healthy, baby, but when i tried to feed him, he made a strange yelping noise.
Am I doing something wrong? I wondered.
“He’s not latching on,” I said to the doctor.
Jack wasn’t able to open his mouth fully, or suckle.
He was taken to the neonatal unit and tube fed while tests were done.
As days passed, Jack started moving his jaw. and opening his mouth but he still had trouble feeding. He never blinked either.
A week later, Doctors diagnosed Jack with facial palsey.
“What does that mean?” Jason asked.
“Jack wont be able to screw up his face when he cries or smiles,” the specialist explains. “He can’t change his expression.”
They didn’t know yet what had caused it and wanted to keep Jack in the hospital to run more tests.
“Can facial palsey be treated”? I asked, gripping Jason’s hand.
“We can do some surgery when he’s older,” he said gently. “But I’m afraid your son will never smile.”
I burst into tears.
What could be more important to a first time mum then to see her child’s toothy grin?
“It doesn’t matter if our son can’t physically smile,” Jason said. “We’ll make sure he’s a happy child.”
Ophthalmologists, an orthopaedic surgeon and a speech therapist started treating our little boy.
Three weeks later we took him home from the hospital. It felt like a step forward and I hoped his condition would improve. But he slept will his eyes half open. We had to use a eye lubricant several times a day so his eyes wouldn’t be dry and sore.
At five months, Jack was still much smaller than other kids his age and couldn’t hold his head up.
Then one afternoon I was tidying up his room when suddenly i heard Jack chuckling behind me.
“Your laughing sweetheart, ” I said happily.
But turning around to face him, I stopped. He was laughing but his face was frozen. There was no smile.
For a moment I expected to see his mouth break into a wide grin.
Tears of sadness stung my eyes.
Christmas that year was hard for me.
“My son can’t even smile for Santa, ” I cried to Jason.
When Jack was eight months old in February 2008, doctors finally had a diagnosis. Jack had Moebius Syndrome.
They said it was a rare congential neurological disorder which caused facial paralysis. It was also the reason he had club feet and was smaller than other kids his age.
The diagnosis was devastating. But there was a silver lining.
“Babies born with this condition live fairly normal lives – some of them just hit their milestones a little later than other kids,” the doctor explained.
One day I was shopping at our local supermarket in Morley, Perth. Jack was in his pram when an elderly women started chatting to him.
“What’s your name little man?” she asked.
“Jack,” I replied.
I was worried she would think Jack was unfriendly. But she shook his little hand and smiled.
“There, I can see a smile coming,” she said kindly.
As Jack got older I learnt to understand him more.
If his face went pink and he made loud throaty noises it meant he was unhappy.
When he was feeling cheerfull he let out a chuckle.
Together we were working out our own way of communicating.
On Christmas Day 2008, we wre having a family get – together at home. we dressed Jack up in a Santa costume for a photo and he excitedly swayed from side to side to his favourite Christmas tune, Jingle Bell Rock.
That year I couldn’t help feeling a tinge of sadness seeing broad smiles on every child’s face as they sat on Santa’s lap at the local supermarket.
My mum, Wendy, tried to make me feel better.
“Linda, Jack’s photo is a treasure,” she said. “When we look at him we see a happy child.”
At eighteen months Jack began crawling. He also started making sounds. He couldn’t pronounce “M” so when he said mum it sounded like nun.
“Say dada,” Jason said. After several attempts Jack said it.
He was almost two when he walked for the first time.
Soon Jack was out riding his tricycle with Jason cheering him on.
I often found Jack, and Jason, on the couch watching baseball, surfing or football on TV.
In June 2009 I fell pregnant.
“What if this child has Moebius Syndrome?” I said.
“The doctor said chances are slim,” Jason reminded me.
In March this year I gave birth to a healthy baby girl, Grace. She has blue eyes. Just like Jack’s.
Every morning Jack goes to Grace’s cot and gives her a big kiss and cuddle.
“Hello Smiley, Youre beautiful,” he said once.
He then turned to me and said, “Mum, Grace is smiling at me and i’m smiling too.”
“Yes baby you are,” I said.
Jack is a chatterbox. He’s shy at first, but once he starts talking there is no stopping him.
He is looking forward to christmas this year.
“When is Jingle Bells coming?” he asks. “Will he bring me a present?”
Jason and I are planing on sending a family photo out. This year Grace, will also be in it. It is such a contrast to see their photos, with Grace’s large grin and Jack’s frozen face. But even though I can’t see it, I know my beautiful son is smiling inside. And that’s what counts.