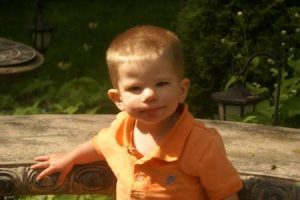 Jacob was born on December 6, 2011 weighing 7 lbs 15 oz. It was a normal pregnancy and a normal birth. He had troubles breastfeeding. The doctor and lactation consultant concluded that it was a tongue and lip tie that were preventing him from eating properly. The weeks following we spent most of our time feeding and pumping. Jacob would take an hour to an hour and a half to eat 1 or 2 ounces and he was not gaining weight.

When he was 5 weeks old we took him to the emergency room because he had a bad cold and it wasn’t getting any better. We were rushed to another hospital to meet with a pediatrician because he was severely dehydrated from the sickness and not eating enough. The pediatrician immediately put him on oxygen and we were told he was being admitted for at least the night. He was weighed in at 8 lbs and 14 oz. Jacob ended up having Bronchiolitis and was quarantined for 6 days in the hospital. Meanwhile the doctors were trying to figure out the reason he wasn’t eating. An ear nose and throat specialist and the pediatrician didn’t think it was a tongue and lip tie issue. The doctors also said something about him having seizures, maybe from the dehydration. They also said something about his eyes being vacant and tone was very floppy. All thise things made them think he had a severe disability. They were really freaking us out! Days later one nurse told me Jacob was the sickest baby she had seen in her 10 year career.

After days in the hospital Jacob was starting to get better and was acting like a normal 6 week old baby but with feeding issues. We wre introduced to the haberman feeder, and that seemed to be working. He was definitely eating but not enough. We were sent home with an appointment at Sick Kids Hospital in Toronto.

Jacob’s appointment at Sick Kids ended up lasting 2 days and was filled with many different doctors, tests, scans and a very unhappy little man from being poked and prodded. There was an OT there that taught us to squeeze Jacob’s cheeks and he was eating so much better. The doctors noticed that his eyes did not move laterally and that he could not blink. He also did not have any facial expression and his tone was low. After a second visit to Sick Kids for more scans, he was finally diagnosed with Moebius Syndrome.

Today, Jacob is 19 months old and the diagnosis hasn’t stopped him. He was crawling by 7 months, and walking at 16 months. He started oral placement therapy 3 months ago and we are starting to see improvement in his facial movements. He isn’t talking yet but is starting to us signs and has an amazing little smile and giggle that can melt anyone’s heart.