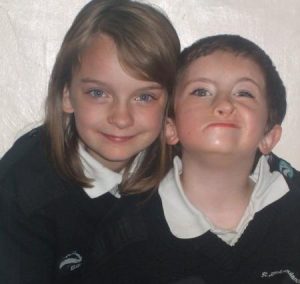 Our son James is 6 years old and the youngest of our 3 children. he weighed 5 pounds and 10 ounces and he was very tiny and had to wear premature clothes although he was full term. he was very weak at birth and had to go into special care. the doctors didn’t know what was wrong , the second week he had to be transferred to leeds general infirmary and they didn’t think he was going to survive but he got stronger and he came back to scarborough, he was in hospital for 7 weeks . The doctors noticed that he couldn’t smile on his right side, he had a lot of feeding problems and had to be cup fed, he couldn’t suck at all. he has to have a lot of speech therapy . he still cant speak that well although he is becoming more understood he still has to be watched when eating because of choking. his tongue is twisted and he has a small opening in his throat caused by the damaged nerves. he is a very active child with no other problems apart from these. oh and he is very small for his age , just had growth hormone tests done , awaiting results. he has no bilateral eye movement as well. his 6 th and 7 th cranial nerve damage but not sure which others are affected. if u need more info just ask.