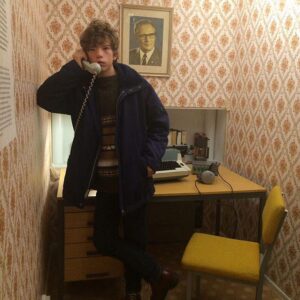 My name is Jasper and I’m twelve years old. This story was written when I was seven. I live with my mum and two little brothers in Western Australia. I have moebius syndrome, it’s when the sixth and seventh cranial nerves haven’t developed. This means that I can’t smile or smirk or grin. But I can pull a good grumpy face because I can move one of my eyebrows a little bit. It is pretty funny.

When I was a tiny baby I couldn’t squint and whenever the sun was in my eyes I would roll my eyes back into my head. My mum didn’t know I had moebius syndrome yet and she used to think this was very scary. I also couldn’t drink out of a bottle but I could breastfeed so it was ok. When I was first born the doctors didn’t even know what it was, they just told my mum I looked a bit different. They said she needed to bring me back for a checkup but even then they couldn’t work it out. They didn’t say anything about having facial paralysis, which my mum thinks is strange because babies usually pull lots of funny faces and I couldn’t pull any at all! She says that I could barely open my eyes at all for about a week when I was born. When I was 10 weeks old I saw a different Dr who told us I had facial paralysis and a few weeks later another Dr told us it was called Moebius Syndrome.

The worst thing about having moebius syndrome is School Photos! I hate them because I stand out so much because everyone else is smiling and pulling faces. I can’t really think of any other bad things.

Moebius syndrome doesn’t really stop me from doing anything. Some things I have to do differently, like I can blow whistles by squeezing my lips around the whistle. I can’t whistle with just my mouth though- but mum isn’t very good at whistling and she doesn’t even have moebius syndrome.

My favourite thing to do is build with lego. I like to build spaceships. I really love dressing up and designing costumes for me and my brother Noah. I like making costumes fore aviator pilots and lots of other things. I also like jumping on my trampoline and I love swimming. I am a really good swimmer and I can do front flips and bombies and pin drops into the pool. My favourite author is Andy Griffiths because he is really funny.

I am starting year two at school next week. School is ok, I guess. I am good at reading. The subjects that I like at school are art, music, library. My favourite bit of school is luchtime because I get to play with my friends. The worst bit of school is having to sit at my desk and be quiet. I get in trouble at school for talking too much, which I don’t think is very fair.

My little brother, Noah, has Duane Syndrome, which is when the sixth cranial nerve doesn’t work. It just means he can’t move one eye outward, but it is a bit like moebius because my sixth cranial nerve doesn’t work either. Mum says that the Dr said this means it is probably genetic in our case, which is very very rare. She says they called it ‘Autosomal recessive’ which means that it is very very very unlikely that if I have kids they will have it. Almost as unlikely as any other baby. My Baby brother does not have anything wrong with his cranial nerves. I don’t really understand what any of that means- mum says it will make more sense when I’m older!

I would like to say to any parents with babies with moebius syndrome that it isn’t so bad- and its not contagious!