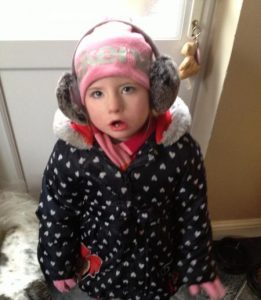 essica’s story so far! At 6 weeks old she had a prolonged seizure and the medication flat lined her three times so she had to be put on life support for 10 days. After coming off that we were in a high dependency unit, then sent on to a ward, then off home!!

At this point we knew Jessica was unable to suck on a bottle. We had known from birth but our health visitor never listened.  Since this was my first child she thought I was over reacting. Jessica struggled to gain weight but with making larger holes in the bottle we managed it!

Over time we just dealt with everything that came our way! Jessica wasn’t able to walk until she was three. She was unable to talk, chew, or drink properly. We had a speech and language tutor but she was no help even after I explained all of Jessica’s problems.  I took Jessica to see Dr. Spinty her neuro doctor and he referred us to the hospital speech and language center. They discovered when Jessica drank fluid went into her lungs. She needed a Mickey button to correct the problem

Shortly after Jessica turned four I started questioning the doctors about her speech and language problems asking how we could correct this. It was then that she was formally diagnosed with having moebius syndrome.

Jessica has never been able to move her face, smile, or be able to chew her food properly I am disappointed the diagnosis was prolonged and feel like they treated me more like an over reacting mother instead of addressing my concerns about Jessica.

We have been potty training for over a year now and she is well on her way to being in big girl in Knickers. It’s a struggle for her to go up and down stairs so sometimes she still has accidents but that is to be expected.

Jessica just takes it all in her stride. She is an amazing little girl who has just turned six and act like she is sixteen. She truly is the light of my life.