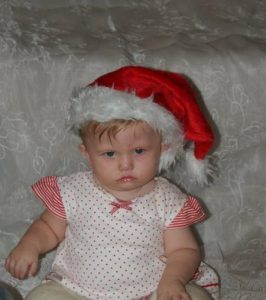 Me and my husband Neil were looking forward to our little one being born. We were brand new in the pregnancy and parent game so every stage was like a discovery for us.

The pregnancy was fine and we had no problems (not even heart burn). At about 32 weeks into the pregnancy we went for the 4 D scan. They could finaly confirm what sex the baby would be, and if everything was allright with the baby. The doctor concluded that she was a little worried about the babies feet and the baby would probably be born with clubfeet. At first it was a shock to us, but thankfully to the internet we knew it could be fixed and that it would only take more patience from us as parents. Accepting this fact we found the perfect paediatric orthopaedic surgeon and knew that all will be allright…

Jessica was born on 41 weeks on the 7th of April 2010 at 5:55. We were ecstatic with her finally arriving, and she was the most beautiful baby ever. (Every persons child is the most beautiful ever). Knowing that she was to be born with clubfeet, we weren’t surprised to the feet in a strange position at all, but the nurses were to afraid to talk to you and rather not even mention the topic. Our paediatrician at that stage requested that we take blood tests. Without understanding why, we went and did it and all results came back normal. I really struggled to breastfeed Jessica and even with a bottle it was as if it was just too hard for her to suck correctly. We ultimately started feeding her with a syringe. Not giving up, I struggled on with the bottle and luckily Jessica started sucking harder, and in her own ways were able to feed on a bottle.

At 3 months (two weeks before Jessica’s tenotomy operation), Jessica was hospitalsed with lung infection. This is where Jessica was tested with MRI scans, EKG’, and numerous blood test and doctors to diagnose her with something, because “there were too many things that were not as it should be”. First she was diagnosed with SMA (Spinal Muscular Atrophy) and the doctors had nothing but bad news for us, even telling us that she would probably die. Later after more doctors came to see her, the SMA diagnoses changed to Moebius. Although to most Moebius parents finding out your child has Moebius it’s hard, but to me and my husband it was a relieve. We knew although Jessica might not be able to reach her goals as other babies do, the fact is still that she will be able to reach them. This syndrome at least did not have any death sentence to it. We accepted it with a thankful heart.

Jessica has since been in hospital 4 times more. Once for bronchiolitis, gastro and has had two feet operations done. She is currently seeing a occupational therapist that is helping her catch up with all the other babies her age, and she is doing great! She has been sitting on her own since she was 7 months old, and at this stage is rolling around everywhere (even with her casts). Her casts are being removed early in January 2011. Jessica is eating well on her own, and she has a very strong chew action. Even her hand eye coordination is up to par. She is still feeding from her bottle on her own, and is learning all sorts of new stuff everyday. She has a lot of stimulation and practice everyday which helps her physical as well as the mental side of things. She is an extremely fast learner. At this stage she is learning to eat by herself (as she only wants to eat by herself thesedays), so I have a sticky little angel when she is done.

I would like to mention to parents who might have a newborn with Moebius, to not look for the blame of the syndrome in yourself. Things like these happen for a reason, and I believe each of these special people are sent to you, to learn you something about yourself and for you to appreciate every step of the way. A Moebius child may reach their goals later but there is not a prouder parent than a Moebius parent once they have reached it. Every step is like a milestone for you, and you notice things that most parents would take for granted. I feel Moebius people are sent straight from God. They are the angels reminding us of the smaller and good things in life. I thank God everyday for Jessica. I thank him for sending her to me and my husband, and although the road somedays may seem very long and never-ending, it is all worth it!