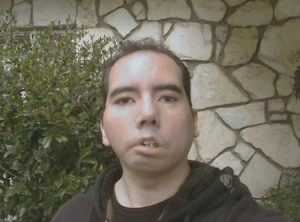 My name is Jose Rueda, and I was borne in Durango Mexico on September 29 1974 The Doctor who delivered me didn’t know what to make of my condition. I was borne with clubbed feet, and I had very little reaction when he examined me. He told my mother to make arrangements for my funeral, because he doubted that I would survive the next few hours and he said, “in the event that your son grows up, he would be confined to a wheelchair for the rest of my life, and he would be severely mental retarded”

My Mother was determined to help me survive. When she took me to her house in Mexico, she tried many methods to feed me, but nothing seem to work until she remembered that my Father occasionally had ear infections, and he used a nozzle that looked like a turkey baster to  administer the medicine into his earlobe. My Mother disinfected the nozzle in hot water, and fed me drops of formula. I had my first operation in Mexico to fix my clubbed feet. The Doctor told my parents that there was nothing more they could do for me and that I would get better treatment in California. When I was three years old we moved to California to find a Doctor who would operate on my feet. My parents took me to Children’s Hospital in Los Angeles but unfortunately at that time, Children’s Hospital didn’t have any Doctors qualified to preform the operation on my feet. The nurse told my parents that they would have to take me to Children’s Hospital in central California, so I was put in the care of the doctors, of Children’s hospital in central California for two years, since my family lived in Los Angeles and it was too far for them to take me to the hospital for my operations. I stayed at the hospital for two years and I had twelve operations done on my feet. My family would come and visit me during the holly days and I had a caring nurse who would comfort me when I need it. During the two years I stayed at the hospital I had to use a wheelchair, because I couldn’t balance myself on crutches. When I was discharged from the hospital the doctors gave  me leg braces to wear to help align my legs. They looked similar to what Forest Gump used when he was younger, and I was ridiculed by the kids in my neighborhood because I wobbled when I walked. They also teased me because of my Moebius Syndrome. The kids use to say that I looked like a fish with it’s mouth wide open, because I don’t have lip closure. The worst part was when they taunted me by chanting “fish face, fish face, ugly ugly fish face. I know it seems silly, but at the time it really hurt my feelings, as a result I didn’t play outside very often. I eventually grew out of my braces and no longer had to ware them. I went to a special ed school so I didn’t have to worry about being teased.

I had my final operation on my feet when I was thirteen year old. I couldn’t use crutches because of my balancing problem, and I wasn’t able to borrow a wheelchair, so for my freshmen year I had to be home schooled. I had to take speech therapy for a few years while I was in special ed, because my speech was very hard to understand. I had hearing problems and I was  able to obtain a hearing aid through a social social program called Regional Center, they also helped me with my vision and dental problems.

I felt like I was the only person on earth with Moebius Syndrome and that I didn’t belong any where, so I joined many social clubs in junior high and high school, to compensate for my loneliness. I soon became very popular and I became the cool kid that every one looked up to and admired.

I was once told by a physician that since my condition was so rare, I would have a one in a million Chance of meeting another person with Moebius Syndrome, and he continued to say “It would be a miracle if you ever found another person with the same condition, it’s more then likely that, that person would be mentally retarded and unable to communicate” I wish I could find this doctor, and let him know how wrong he was, by what he told me because one day I saw a girl on the news a girl who had Moebius Syndrome, and she had the smile surgery. Her name was Chelsey Thomas, and some how I was able to get in contact with her and her mother. I discovered that her mother ran a support group for people with Moebius syndrome. I went to their meeting and it was the happiest day of my life, because I now know that there were other people just like me with Moebius Syndrome, and I know that I wasn’t alone in this world any more. I felt like I finally belonged some where.

When I was in high school, I was still in special Ed and some of my friends from junior high were in my classes, so at least I had my friends to talk to when I had problems. My speech had improved by high school, but my speech was still a little hard to understand. On occasions I would come across a person that had a hard time understanding what I was saying so I carried a notepad and a pencil with me. I learned sign language, but I could only use it in school. Outside of school no really know how to sign, or if I found some one who knew how to sign they would have a hard time understanding me because I was not able to show facial expressions.

I am now an adult in my mid thirties and I speak very clearly that the majority of people can understand me, however every once in a while I will encounter a person that doesn’t understand what I’m saying or didn’t understand my witting, It makes me wonder if these people truly can’t understand me, or are they some how trying to make fun of me, but when that happens I try to find some one that can understands me, and that will help me convey what I’m expressing. This usually happens when I go to a fast food restaurant, But I’m very patient with the person behind the counter, and I take time to make sure that the person understands what I’m saying.

I am  a singer, I sing all styles of music but I mostly sing Rancheras songs. I want to sing professionally for a few years at a night club, and become famous like Vicente Fernandez. When I’m older I want to open a school for vocalist, and  I teach people how to sing Ranchera songs, and I’ll offer these class at an affordable price.

When I was child I grew up listening to my Dad singing Ranchera songs. He was a huge fan of Vicente fernadez and my Dad sang his songs every day. On my birthday he would stand by my bed, in the morning and sing Las mañanitas (happy Birthday in Spanish) and he had a beautiful voice. My Dad passed away on April 18, 2009 from prostate cancer, and ever since he passed away, he has been my inspiration to be a singer, because I miss hearing him sing, and My family says I sound like my Dad when I sing. I have been singing a while and I have a beautiful voice just like my Dad.