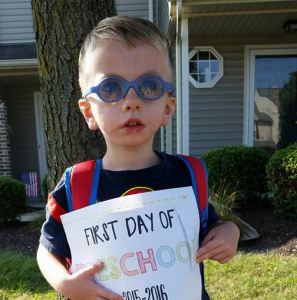 After a pregnancy full of complications, Jude was delivered in a planned c-section at 37 weeks. I had multiple ultrasounds during my pregnancy but the baby was always fine. However, right after he was delivered we knew something was wrong. He didn’t cry right away and when he did was soft and didn’t have the sound that newborns make. The nurses thought the left side of his chin was not normal at first.

The neonatologist thought that the issues were transitional and sent the baby to my room. In my room I wasn’t able to nurse him. His mouth didn’t open very much and he couldn’t make a suction. I asked the on-call pediatrician to take a look at Jude. She examined him and wouldn’t say much except that he needed to go back to the NICU.
There, in the NICU, he was given an IV and was examined again by the neonatologist, a pediatric neurologist, a pediatric plastic surgeon and a pediatric ENT. The ENT didn’t know what to make of all of his symptoms so he went back to his office and plugged the symptoms into a program that gave him the name Moebius syndrome. The neurologist agreed with that diagnosis. So, from there is was just figuring out how we could keep him alive.

First, we needed a way to feed him. Luckily for us, the NICU has a wonderful feeding therapist with years of experience. She worked with him using the Haberman Feeder. Now we had a way to feed him but he didn’t want to eat as much as he needed to so they put a tube down his nose. After 2 or so weeks, the doctors decided Jude could go home but that he needed a feeding tube put in his stomach. Originally the neonatologist told Jude’s dad that we should take him home and try to feed him with the Haberman and if we had problems to then come back for the tube. Then he spoke to another doctor and the feeding therapist. With their suggestions, we agreed to have a g-tube put in.

We got to take Jude home 4 days later. He was slow to gain weight, having left the hospital at the same weight as when he was born, 6 pounds 8 ounces. He was also slow with his physical milestones too. Tummy time is difficult with a g-tube. And we rarely needed to use the g-tube, which had been replaced with a mickey button. We started tons of therapies and he was catching up fairly well.

Then one day his stomach became bloated and he started vomiting and ended up being admitted to the hospital. The next day it was determined, after he was vomiting blood, that the balloon that keeps the mickey button in place was injuring his stomach causing it to swell. And since it was swollen the balloon went into his small intestines causing nothing to go through. We took out the mickey button and let it heal over.

Now he is meeting all of his physical milestones and is putting on tons of weight. We can thicken his food with rice cereal rather than nectar now. And he’s eating solids off a regular spoon with great success.

We’ve always felt so blessed that for Moebius, Jude is mild. He doesn’t have any physical deformities that are so common. His chin was small and recessed but he doesn’t have Pierre-Robins and it seems to be growing now. His eyes are crossed but not always. And he has a working nerve in the left corner of his mouth, which gives him a smirk. He giggles all the time and talks to us and loves his big sister. He’s the most wonderful blessing we could have ever asked for. And he is so cute!