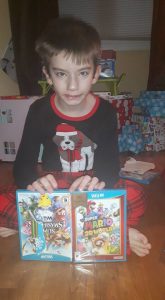 My name is Catherine, and I am Judes Mother.  I had such a wonderful pregnancy with Jude.  Aside from gaining A LOT of weight (hey, I was hungry!) everything was awesome.  No problems or complications.  I was due to have him March 4th 2007, but wasnt induced until March 16th.  After 8 long hours, without any contractions whatsoever, they decided on a C-Section, leaving my little Irish leprechaun to be born on St. Patricks Day! It wasnt until having the surgery that they realized the reason I didnt contract or dilate during the induction, was due to me having a Bi-Cornuate Uterus (heart shaped) which they later told me had nothing to do with Jude having Moebius.

Jude and I were in the hospital for about 4-5 days where I was given 3 blood transfusions due to so much blood loss at Judes birth.  So between this, and trying to breast feed, I was pretty overwhelmed.  The nurses would try for hours to get Jude to latch, and after a little while, they said he was latching and eating fine.  I never felt much suction, but he seemed happy and content, and his mouth was moving, so I thought he was doing just fine.

Bringing Jude home was a happy/scary day.  Not having the help of the nurses at Canmore Hospital made me nervous, but I guess every new Mom feels the same way.  After 2 days, I noticed Jude was losing weight.  I knew newborns lose a little bit of weight, but he lost so much the public nurse made me go see my family doctor.  He was very ‘colic’ and I hadn’t slept more than 12 hours since he was born.  Exhausted, I brought him in, where my doctor realized bottle feeding might be a better option.  After 2 days of attempted bottle feeding, I knew the reason Jude was losing weight and screaming was because he was hungry, and I didnt know how I was going to feed him.

We brought Jude into the ER in Canmore, Ab, where they then rushed us by ambulance to Alberta Childrens Hospital in Calgary, Ab.  After a few grueling hours in the ER there, they decided to feed Jude via NG tube.  As soon as he got his little belly full, he was content and fell asleep.

For days, Jude was seen by Occupational Therapists, Neurologists, ENT’s, Optometrists, Geneticists.. where they did a bunch of different tests to try and come up with a diagnosis.  After about 10 days in the hospital they finally told us that Jude had Moebius Syndrome.

This is the crazy part.  When I was in high school I took a Parenting course.  We were told to do a project on a rare Birth Defect, and my teacher had a past student, Terry McKnight, come in and speak to us about how he lives his life with a rare birth defect called, Moebius Syndrome.  After listening to Terry speak I was so moved and so astonished how a man who had such limited movement of his facial muscles, could talk so clearly, and be in University and doing so well for himself that I thought “Wow, If I ever had a child one day with Moebius Syndrome, it wouldnt be that bad, because look at how well this guy is doing.”  Little did I know, I would have a child a few years later who was born with the same thing.

Terry helped me in many ways cope with Jude having Moebius.  At first, it was very hard as I had to NG tube feed him for several months.  I finally got Jude bottle feeding by about 5-6 months after making the hole in his bottle a perfect size where he could sort of ‘chew’ his formula out.

Jude is now 27 months old, and the absolute light of my life.  He crawled at 14 months, and walked at 21 months.  He is still seeing Speech and Physio Therapists, but besides that Jude is just the same as all the little children in his Nursery class.  He has come such a long way since March 17th 2007, and everyday I notice little changes.  I wouldnt have Jude any other way beause he helps me to realize that being unique, is a beautiful thing, and Life is Good 🙂