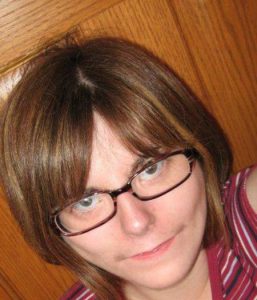 My pale cheeks reddened as I slouched in my seat. I was 12 years old and sitting in my bra and underwear. When the doctor came in the room, my cheeks burned with embarrassment. Even though I wore undergarments, I felt naked in front of this older man with the bushy mustache and thick glasses. The doctor looked at me, cocked his head to the side, and raised his eyebrows. He told me to stand up and bend down and reach for my toes as he examined my back for scoliosis. He gazed at my mother, who was also in the room.

“Her back looks fine,” the doctor said to my mother. “By the way, what kind of drugs did you take when you were pregnant?”
My cheeks now felt like hot lava as my emotions went from embarrassment to anger. I covered my deformed right hand, which looked like a puppy’s paw, with my left hand and looked down at the floor.

My mother never took drugs when she was pregnant. I was born with Moebius Syndrome, a form of facial paralysis, and there is no known cause. People with Moebius can’t do things like smile, blink, raise their eyebrows, or pucker their lips. They can also have problems with sucking, drooling, and swallowing. Deformities of limbs are common too, which is the reason my right hand looks like a paw. I also have a club foot and webbed toes.

I couldn’t be breast fed when I was a baby because I wasn’t able to suck properly. My parents had to push the sides of my mouth together so I was able to suck on a bottle. Pretty soon I started holding my hands up to my mouth and sucked on the bottle by myself. Even when I was a baby, I didn’t let Moebius hold me back.

As I grew up, the name-calling was brutal. Kids called me names like “Captain Hook” and “One-Handed Bandit.” They would also tell me to smile and then laugh when I couldn’t do it. I tried not to let the cruel kids get to me though. I was a stubborn, determined child, insisting I could do everything the other kids could do. I learned how to tie my shoes. I learned how to cross the monkey bars. I learned how to rollerblade, even though my balance wasn’t that good because of my club foot. In gym class I swung the bat and heard the crack of contact. I was a goofy child, always ready to make people laugh. According to my family, I had quite the hardy laugh. That’s how I showed people I was happy, through giggles and gleaming eyes instead of grins.

When I was 10 years old, my family heard about a girl in California who had the very first smile surgery. Nerve and muscle was taken from the inner thighs and implanted into the face. The nerve was connected to the biting nerve, so when one bit down, a smile was created. My parents and I decided to pursue the smile surgery. When I was 11 years old, we met with a doctor in Madison. The doctor said he wanted to test how much nerve I had in my face. I was given a little cup of what I thought was numbing medicine. Then the doctor stuck needles all over my face. To my shock and displeasure, the medicine was only a sedative and didn’t numb my face at all. I did have some nerve in my face and felt a sharp prick as the needle was shoved in near my jaw. I was deathly afraid of needles before, and after that experience, I wanted nothing more to do with the smile surgery.

A few years went by and as I matured, I decided to revisit the idea of having the smile surgery. When I was 15 years old, I flew to California and a well-known doctor performed my surgery. Only one side of the face was operated on at a time though. A few months later, the other side was operated on. There was a complication during my first surgery. A blood clot developed in my face, and I was rushed into emergency surgery because the swelling was about to block my breathing passage. My face was so swollen I couldn’t open my eye. There were no complications with my second surgery though.

It took a month or two for the nerve and muscle to start working, so after my surgeries my family and I anxiously awaited my first smile. Slowly, the sides of my mouth began rising. I remember standing in front of the mirror, marveling at my new ability to smile. Tears streamed from my grandfather’s gentle eyes when I smiled at him for the first time. When I stood face to face with my aunt and smiled at her for the first time, she smiled back and asked me why I was staring at her. She was so used to naturally smiling back at people that it took her a few seconds to realize what was happening.

I’ve been able to smile for six years now. I actually can’t remember what it was like not to be able to smile. I often wonder if people who can smile realize what a gift it is. I sure don’t take it for granted. I still get a thrill when I’m walking down the street and someone passes by and smiles at me, and I’m able to smile back.

When I was younger, I used to think I was a freak because I had Moebius. When people stared at me, my shoulders slumped and my head dropped. I realize now that having Moebius makes me unique. All the years of teasing caused me to become a stronger person. I have empathy for people and am determined to spread the word that just because people may look different doesn’t mean they are freaks.