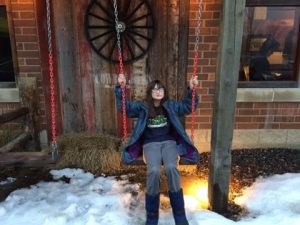 Kasey has been unpredictable from before she was even born.  Kasey is the last of our children she has 3 older brothers.  I was convinced that I was having another boy, since we didn’t want to find out the sex.  It was a little over 3 ½ weeks before Kasey was due, she decided she was ready.   My OB was having their baby the same day down the hall.    They did a C section and when they brought Kasey out they said a pause it is a girl.  I asked the person by my head is it really a girl, they laughed and said yes.  I got to see Kasey a little while later, I tried to nurse her but she was having trouble.  I wasn’t too concerned at this time because all the others had trouble nursing.  I pumped some milk and used a dropper to give her some milk, she kept chocking so the nurses were coming in and suctioning often.  The next morning our pediatrician came in and said that they needed to send her to NICU because something was wrong but weren’t sure what it was.  She told me that they would be taking her to Minneapolis in NICU equipped ambulance.  A little bit later a team of 3 came in and got Kasey ready to leave in the ambulance, my husband was on his way over and missed them taking her.  I was a wreck it hadn’t even been 24 hours since I had the C-Section.  I begged them to release me and they did, gave me some pain pills and said to try to take it easy.  We raced down to the hospital and into NICU.

This was a totally new experience we had never had any health issues with the other children.  Kasey was the largest baby in the NICU and had the least amount of tubes.  I think the thing I learned from being in the NICU with Kasey for 11 days is that you need to ask questions and stick up for yourself.  The NICU was a teaching hospital so when they did rounds there were usually 7 to 8 people, residents, fellows etc.  I happened to be there a few days into her stay when they came around.  They come with a computer and a stand and then present and then the head of the team talks to the parents.  I listened to the reports from the others and didn’t understand much.  It was then the Doctors turn to talk to me.  She started and said all these technical terms and went really fast.  I paused at the end, I said I have one question is she going to make it?  I then told her she needed to explain what was happening in language I could understand.  She seemed taken aback, she told me with more understandable language and if I didn’t get part of it I would ask for clarification.  The next time she did a version I could understand.  I think it was a good lesson for the Doctor and new doctors in training.

I loved being home, feeding took a long time and seemed to wear Kasey out.  I was afraid to lay her down because I would hear gurgling.  We went to have a swallow study done and they found she was aspirating.  The solution thicken her breast milk.  We tried this but it was so hard for her to get anything and she was losing weight.  We met with a GI and they decided a feeding tube so we wouldn’t have to be worried about gaining weight and aspiration.  This is where I learned another important lesson, nurses get things done.  They were planning to send us home and then have the G tube placed in 3 days.  I broke down crying and told the nurse I can’t take her home I am afraid she will choke and be too weak for surgery.  She left the room, the Dr Came back and said they would put Kasey in the hospital until surgery.  I know the nurse talked to the doctor and got her admitted.  A little bit after this they gave her the official diagnosis of Moebius sequence.

After the feeding tube she was so much healthier, she had many therapies at home and did very well.  She also could start taking fluids from a Haberman  feeder at about 5 months and we didn’t use the tube except for medications.  The other thing that made a huge difference for Kasey was at 17 months she started feeding therapy and this helped keep up her weight so she had her G tube taken out at age 3.

It was during this time that I was connected to the Moebuis  groups online and this was such a huge help.  It helped me realize that Kasey accomplishes things at her own timeline.  We also went to the Moebius Conference in Denver and this made a huge change in our lives.  We had never met anyone with Moebius  before, it was so amazing for Kasey to see someone that was like her.  It also showed us what great things she will accomplish.  I also realized why people are so attracted to Kasey, and  all the children and adults just seem to draw people to them even without seeing a smile.

We feel blessed that Kasey joined our lives.  She has taught our family so much about courage and grace and is an inspiration to all who meet her.  She has helped us to slow down and focus on what is important in life.  It showed me how to deal with people staring, the kids I have found just want to know what is going on.  I have seen kids look and when I tell them they say ok and then ask can she play.  It has also shown us how many good and wonderful  people  are out there.  The most recent thing is Kasey had a tendon temporalis transfer and a gold weight put in her eyelid  over Thanksgiving, it was so exciting to see movement on the paralyzed side for the first time.