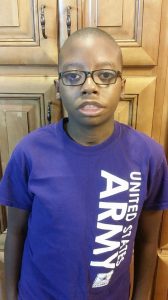 My name is Kiowana Williams and I serve as a Staff Sergeant in the United States Army.  I have a 6 year old son named Khaleb Williams. He was born with Moebius Syndrome and wasn’t diagnosed until he was 2 months old. He also has a trach which he has had since April 2008.Khaleb enjoys running, sports, movies, bowling, singing, and dancing. Khaleb having Moebius Syndrome has affected him only because of his speech. Because of the syndrome, he was born with clubbed feet and has had his feet broken twice to correct them. He has a speech delay that does not allow him to say P, B, or M words with a closed mouth. He is in Kindergarten and is very smart. Being in the military, we travel a lot and has never met anyone else with Moebius. My goal in life is for Khaleb to be able to communicate with anyone and for them to understand

him. Also I want him to be able to learn and progress with his peers. Sometimes I feel that he is a little shy or may be afraid to approach other children his age because he knows that they won’t understand him.
I want to teach him to be fearless and to be strong and accomplish anything that his heart desires. I know that he will be great at everything that he does in life. I have had to fight with a school before because they wanted to put him in a special education class because he had a speech delay. He is not developmentally delay and can do what any other child can do. The only difference is that you have to listen a little harder to understand him. Well I won and he is in a General Education class now. I want to educate people on Moebius Syndrome and maybe one day start my own foundation. I did not know what it was until he was born. The only thing that Khaleb cannot do is smile but he smiles with his heart and laughs with his soul and if you are around him, you can feel his love through his spirit.
Thanks.