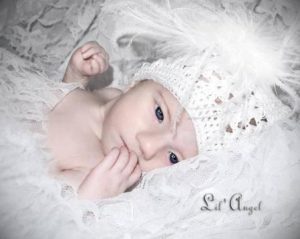 Kiaya Elizabeth Marie Worthey was born on February 7th 2012. I went in to induced labor to have her. When she was born she wasn’t breathing so she had to be resuscitated. I was allowed to hold her just long enough to be told that her hands were messed up, ears were to low, chest bone was to small, jaw was to small,  tounge was deformed, and that she had clubbed feet. After that they took her to the NICU where they put in an IV and gave her oxygen.

When I saw her the next day in NICU she wasn’t on oxygen and her stats were up. That was great news. Again the doctors told me everything that wasn’t right with her, but to me she was perfect. They did lots of blood work. Then the genetics doctor came in and told us it looked like trisomy 18. We were told she would only live, at the most, two weeks. We were heart broken. 2 weeks later we got a call saying that the tests for trisomy 18 were negative. Thank God! They did a global ray for everything that could be wrong. Everything came back normal. Then one day while one of the NICU doctors was looking at her he noticed she didn’t have any facial movement! He did some research and found out about Moebius Syndrome.

She was transferred to St. Louis childrens hospital for her gtube placement and that is where she was formally diagnosed with having moebius syndrome. It was a long rough process but in the end everything was fine and I wouldn’t change a thing. She is our Little Miracle. Our Angel. She’s perfect just the way she is.