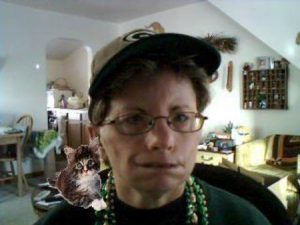 I was teased horribly in middle school. I was teased a lot in grade school also, but not like in middle school. Those boys were TERRIBLY MEAN!! One boy in particular, Billy was the instigator of all evil. If he would see me in the hall, he’d yell, “Woofie, Woofie, there goes Woofie. Woofie Woofie Woofie.!!!!” I was mortified. I remember looking at kids in the hall. At that time it seemed to me that EVERYONE KNEW EXACTLY WHO BILLY WAS TALKING TO/ABOUT. I felt about one inch tall. I didn’t know where to look or how to escape his torment. Billy also, unfortunately was my next door neighbor. So I was equally tormented at home, when no moms or dads were around to see. As I sit here typing this I still get a chill in my bones and a tear in my eye. It has, in a way, affected me permanently. Unfortunately, Billy and I went on to the same high school. Things did get slightly better, just because we didn’t see each other very often. But when he did see me, he felt he had to remind me of just how terrible I looked to him and everyone else. (So my high school self esteem told me)

Because of those kinds of kids, I never have gone to any of my high school reunions. I don’t want or need to relive any of that.

Billy/Bill went on to marry, have two daughters and one grandchild. At one point in my life when I was in therapy, my therapist suggested I write a letter to Billy. The therapist said I didn’t need to mail it, just write it, to help (supposedly) free myself of those terrible memories. I did write the letter and later, DID decide to mail it. I don’t know the reaction. I do remember that one of the things I said was that I hoped that neither of his daughters would ever have to endure the mental pain that I did due to teasing. Years after that, one of his girls got some rare condition and ended up needing a bone marrow transplant. Maybe, in a way, he paid. I don’t know. His daughter is perfectly fine now, but I know it was very touch and go there for quite a while. I’ve always wondered if my letter and the pain he caused me ever entered his mind during his life changing experience.

Thanks everyone for listening/reading. I know most of us have undergone much of the same teasing. I think I’m going to post this story on my Facebook page.

Love to all my Moebius brothers and sisters.