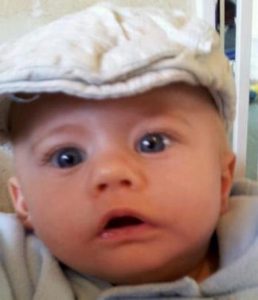 At my 20 week they told me that i was having a boy and that there was something wrong with his feet. So we went to manchester for a more detailed scan the doctors there said he is missing bones and doesnt have all his toes and his feet are twisted…. that was the worst feeling in the world. They also said he could have an underlining condition so i had an amnio test done which came back fine no chromosone abnormalities. i had a few more scans during my pregnancy to see how he was doing which was not good he wasnt growing very well and finally at 36 weeks i got induced. Michael riley collins was born on 19th february 2011 weighing 4lb 9 oz. i noticed that his lower jaw was very far back and and very small doctors said this was fine some babies are just born like that. as he had a smallmouth it was difficult finding a teat that would fit but we did and then came the next problem he wasnt sucking he could get nothing out of the teat so i had to squeeze the teat so milk would go into his mouth, docs said he couldnt suck properly yet because he was early but he would get the hang of it. after we left the hospital mickey still couldnt suck so we saw a cleft palate lady and she said he has a high palette bu he had no cleft so he didnt need the special squeezy bottles. as he couldnt suck he wasnt getting enough milk so he lost weight at 1 month he weighed 4lb1 oz we went into hospital to see what was wrong we saw a dietrician who gave us high calorie milk to help weight gain, he did start to gain weight but it was very slow going. he was about 6 weeks old when i noticed he couldnt move his eyes he didnt blink at all and when he was asleep his eyes didnt shut properly. i asked my health visitor what she thought and again i got told its because he was early he would start to develope more as he got bigger. he did get longer but stayed very skinny and then i realsied i had not seen his face move he didnt smile he didnt screw up his face not even when he cried so i spoke to my health visitor again she had no clue why. at 4 months old we saw a peadatriion i gave her my list of syptoms:

He has talipies/clubfoot, he has only got 4 toes on his right foot and they are very small he has no toes on his left foot and both feet are very small.
does not blink
cant suck
cant breath properly always sounds chesty
dont move his face
cant cry properly
small jaw
no body stength
she said it could be moebius syndrome.
over the next fewmonths we saw an eye doctor who told me that he could see fine (was looking at the pictures) but better in his right eye. he had a mri(brain) scan which showed his brain wasfine but he had a high palette and under developed tongue. we have seen a genetic counceller who said hehas all the symptomsof moebius.
Finally after 6 months of struggling to feed him liverpool hospital put a gastrostomy tube in his belly. he also had an operation on his throat at the same time to help him breath, he had to have some of his epiglotis shaved off in his throat so he could breath easier. he spent that weekendin intensive care as his throat swelled up and he really couldnt breath he had to have an oxygen mask that was the scariest moments of my life.

he his now 10months old and doing very well he has gained weight thanks to the tubein his belly and he can hold his head without support, he can roll over andreach for things thanks to physio and portage who come and see him every week.
he laughs and makes funny noises and is just lovely lol.
he has had 2 operations to release the tendons at the back of his foot the first one didnt work but the secoond did so now he has to wear his boots and bar 23 hours a day for the next 3 months, already they have made adifference to the shape of his foot and its alot straighter so things are finally getting better apart from the cold he has had for the last few weeks.
He has special chair that helps him sit up straight without em having to hold him which is great as now i can play with him. he aslo has a bath chair to support himin the bath which again is brilliant.

itas been hard to write this as im sure i missed out a few things but im soo glad he is getting better it has been a very difficult time especially when the doctors dont have a clue about moebius. not had very good experices at hospitals and with doctors im sure they thiught i was oveer reacting most of the time in the end i screamed and shouted at all doctors health visitors and nurses that had been involved with him to get him the help he needed, out of the 50or so docs i seen only 2 have seen moebius before so it has been very frustrating. im so glad that there is a site on facebook to offer advice and answer any questions i had everyone has been so helpful so thank you. hopefully things carry on improving for him. he is a very loved little man
thanks for reading this look forwrd to hearing from you
love lisa and mickey
xxx