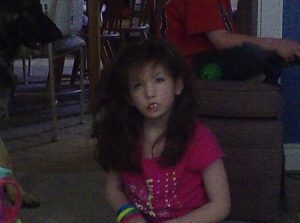 I wanted to share the story of my daughter Morgan. She is 9 years old, the last of my four children. She was born and lives in Lancaster, Pennsylvania. I had a normal pregnancy, no complications, in fact she was the easiest delivery for me. I remember giving birth to her and normally, right after, the nurses put your child on your lap and you get to see them for the first time. In Morgan’s case I didn’t get that and it was scary. They couldn’t tell me what was wrong. I heard her crying but the nurse took her to the waiting “crib” and called the Dr back in. Later that day I found out she had Moebius Syndrome.I didn’t get much information on what exactly it was or what caused it. Basically the Dr just told me her face was paralyzed and she had damage to the 6th and 7th cranial nerve.It was right out of the text book and nothing more. She had all her limbs, fingers, her vitals were perfect…just her face could not move. They couldn’t even tell me how she got it and gave me a textbook answer for that too. She was admitted into the local childrens hospital after being in the NICU for a couple of days. They wanted to put a G Tube in her but I refused saying they had to find another way to feed her. I had a G Tube when I was born and I hate the scar I have from it. I didn’t want more complications for Morgan than she already had. They used the Hayberman bottle for her so she got to eat without the G Tube.

I got to bring her home and got scared. Morgan did not like to be held, she cried every time she fell asleep, she did not like car rides, strollers..etc..any kind of movement. She would scream every time we took her out of the house.She didn’t even like the baby carriers you strap to the front of your body. The Dr’s couldn’t tell me much…everything was explained by Moebius…but no one could exactly explain the affects of what was going on or what to expect. Gradually Morgan got used to “life”. She cried less, smiled more (she can smile with the left side of her face), let me hold her more…but it took a year.

She went to speech therapy, physical therapy, occupational therapy..yet with her fear of people and not like being touched…it was hard for the workers. This went on until she was three. I couldn’t get any real help as far as knowledgeable Dr’s. It wasn’t their fault it is a rare condition. Morgan has had eye surgery, and dental surgery twice. Her dental issues are going to be a continuous effort. She wears glasses and her eye sight problems will also be continuous. When Morgan was 4 she almost died. It was Christmas Eve and we had family over. Morgan woke up with a cold, she was eating a little and drinking so I gave her some medicine for her fever which wasn’t alarmingly high. She went to her room to lay down and sleep. Three hours later I went to wake her up and she was lethargic and we could not get her to wake up. I rushed her to the hospital and they took one look at her and rushed her back, it all happened so fast. Next they told me they were flying her by helicopter to the childrens hospital. She made it of course, but in my heart the Dr’s gave her the wrong diagnosis. They blamed it on her Moebius saying that the cold medicine hardened on her chest and caused her to not be able to breathe. She only had one dose! She has taken that medicine before with no problems. So after the rough start with my baby girl I am proud and happy to say she is such a great child. She outgrew a lot of her fears. She LOVES food haha She LOVES to talk and once you get to know her you can understand what she is saying. She goes to regular public school and although this year she is being bullied it is going well. I am working on the bully issue with the school. She finally has a best friend who is great. She accepts Morgan for who she is and when Morgan is around her they act like normal pre-teens which is scary for me haha. They talk about Justin Beiber, the Jonas Brothers, and which boys in class are cute etc. I love listening to them.
Morgan is such a loving child. She has pure love for life! Her favorite thing is making video’s and dancing. She joined the cheer leading squad for our town. I was worried and of course most of the girls stayed away from her but she always finds atleast one person in a group who accepts her. She loves animals especially rabbits. She wants to help all the animals in the world and cries when she sees an animal sad or hurt. She recently was in the local paper because of a play she was in at a church. That was nice.

As she gets older she understands that her face cannot move the way she wants but she has found her own way to express herself and she is very good at it. She does not let Moebius slow her down. She is loving to everyone she meets and in my opinion if the world had a few more “Morgan’s” it would be a better place. Her spirit is so contagious, her joy of life just melts your heart. She has a keen sense of what people are feeling and if you are feeling down she knows how to lift your spirits. I have a saying that I use a lot and that is “Everyone should have a Morgan”.