Nothing about the way Ozzie was born was how i plann 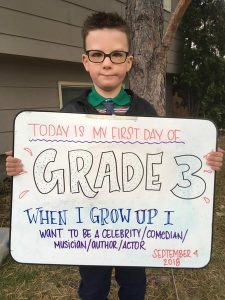 ed it. With our older son Cedric being born 8 weeks early, i had every intention of having a calm and relaxed home birth in a pool in my rumpus room surrounded by soft lights and music that i liked, lavender scented massage oils, my midwife coaching me through delivery, my husband Brad in the pool to catch our baby and then the three of us resting… in our own home, with our new bundle of joy nursing like a champion.

And life took my plans and stomped on them.

Instead, i went into a fast and hard labour 7 weeks before my due date – dilating from 4 -10 cm at a quick pace, 3 pushes and Ozzie was born five hours after we arrived at the hospital. They whisked him away to the NeoNatal table to check him out, as they do with any early delivery… and the first thing the nurse said to my husband was not “congratulations” – but: “I see some slight facial deformities here.” And then she proceeded to tell him everything bad she could find on him. I hadn’t even seen our baby yet, and i remember thinking it was taking longer to see him than it did when Cedric was born… and when she eventually did bring him to me to hold, she said the same thing about the facial deformity… i kept thinking: “What is she talking about? He’s perfect!!”(this woman would turn out to be the most annoying and brash nurse in the NICU staff… everything about her irritated me.)

It didn’t take long to get back into the NICU routine. The coming and going, getting to know which nurses you loved and which ones you HOPED weren’t taking care of your baby that day.And in those first few days, Ozzie had many doctors and residents to see him.Over the course of the first week or so we learned that Ozzie has club feet and would have a long stretch of casting followed by boots and bars to correct the condition.We learned that he is a bit tongue tied, which may or may not be an issue.We will have to wait until he starts learning to talk.We learned that he has a weak suck/swallow/gag reflex and because of this he had a difficult time learning to bottle feed.

Then, when Ozzie was only a couple of weeks old, they told me that it was likely that we would never see our baby smile. That they thought he had Moebius Syndrome.

When i heard this, i mentally shut down. It felt like one thing after the other and this was the straw that broke MY back.
It was completely overwhelming.

Ozzie’s doctors had mentioned Moebius Syndrome a few times during rounds, but no one ever really explained to me what it was in great detail until the Geneticist came. “Moebius Syndrome,” he said, “is an extremely rare neurological disorder, present at birth, that affects (but is not limited to) cranial 6 & 7 nerves. These nerves can be underdeveloped or weak or missing altogether, and it affects 2-20 cases in a million.”
WHAT?

I very naively asked him if there was treatment, like surgery… and he sort of laughed in what i felt was a very condescending way and said; “There is no treatment. If the nerves are missing, they are missing and there’s not much we can do about that.” psh. Like i went to medical school. I’m still pissed about that. (Honestly, some doctors have absolutely NO bedside manner)

So, we moved forward with this information. As much as it sucked, it was better to finally put a name to it. I felt like if i could call it SOMETHING then i could learn about it and find out what the next steps would be.

But we weren’t ready to talk about it yet. We told a few people here and there, testing the waters with their reactions, but for the most part i was like an ostrich with my head in the sand. If i didn’t think about it, it wouldn’t exist – I couldn’t even write or blog about my little baby because just thinking about it filled me with anxiety…
…until Ozzie got RSV and bronchiliatic pneumonia in February and spent 5 days in isolation on the Paediatric ward. We spent the first few days repeating ourselves over and over again to doctors and nurses explaining; “No, that’s normal for him, he has Moebius Syndrome.” to almost everything they said. And on the last few days i even had one student nurse who told me he was excited to meet Ozzie because he heard there was a baby with Moebius on the floor and had spent the night researching it and it how cool it was “cuz it’s super rare” – and when he saw him, he almost looked disappointed that he wasn’t as facially deformed as he thought he’d be.

When we were finally able to bring Ozzie home and things were starting to get back to normal, it seemed like my sand had finally all blown away and i couldn’t ignore it any more. One night i turned to Brad and said: “So,… i guess Ozzie has Moebius Syndrome.”
Acceptance.

Maybe its a good thing that Ozzie came so early – so that he was surrounded by medical staff who caught his condition early. 2-20 cases in a million; that’s such a big window because often kids aren’t diagnosed right away.
Luckily, because of an amazing NICU doc (Dr. Sankaran) we have been fast-tracked – and Ozzie already has a great “team” working with him. He has the best Paediatrician in the city, he has a neurologist, a geneticist, a opthamologist, a speech pathologist, occupational therapist, physical therapist, facial/orthodontic specialist, dietician, and social worker. We are in the system, we have been watching Ozzie’s progress, checking milestones – all things considered, he’s doing amazingly well.

He’s since moved from the Haberman feeder to a cleft palate nurser (his palate is fine, it’s just an easier bottle for us to handle.) He’s quite vocal – generally happy, he pretty much only screams when he’s hungry or needs a clean diaper… which is lucky because i don’t know if i’d be able to handle all this and colic too.
He’s growing like a weed, at his last weigh-in he was 17lbs 13 ozs, a far cry from his birth weight of 3lbs 15oz. He’s nice and fat, just the way babies should be. He’s meeting his developmental milestones, for the most part – but he IS a little behind. He won’t be forever.

So, there’s a long road ahead of us. This, we know for sure. With so many uncertainties, Brad and i rely heavily on each other and have had such wonderful support from our friends and families that we sometimes feel overwhelmed, but in a very good way. The future is unknown, i think at this point the hardest part will be dealing with people’s general reactions when they meet him for the first time. Just the other day i took Cedric and Ozzie to get their Spring pictures done and the photographer asked me: “Can he look this way”, “No, not really. Pretty much just straight ahead” then later: “Does he smile at all?” “Uhm, nope. That’s about as good as you’re going to get.”

But the truth is, he has an amazing smile. He has such expression in his eyes, you just know when he’s happy. And he laughs and coos, just like other babies do. But if you can catch him in the right mood – he has the teeniest tiniest hint of a smirk – and i’ll tell ya, it brings me close to tears each time i see it. Because for someone i was told would NEVER smile…. his little smile is the most beautiful thing in the world.