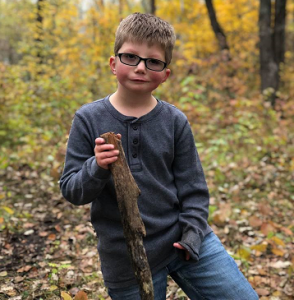 On June 2nd, 2011 my husband James and I went into the hospital around 5 am. I was beyond ready to give birth and to see our sweet boy who had been very active the couple months before. Even though this was a whole new experience for me and James, things went pretty ‘normally’ from what I knew. The time came for him to come and the doctor laid him up on me so we could finally meet him! Ryan didn’t have much of a cry, he was pretty quiet. Before I could even think to count all ten fingers and toes, I noticed that Ryan was obviously missing some fingers on his left hand. I was shocked and devastated and at that moment it seemed like no one else saw it. I remember exactly how I felt but yet cannot explain how I felt at that moment. When the nurses took him over to the warming table to clean him up, the nurse said that his eyes rolled back and they assumed that he was having a seizure. We didn’t find this out until moments later of course and then the team was talking about what the plans were for our newborn baby. A team from the NICU in Fargo, ND came to our hospital (45 miles away) to evaluate him and ultimately ended up taking him with them to Fargo for more testing and monitoring. Even though this was all in the later afternoon of the same day, everything seemed to happen so fast and nothing went as I had imagined it would.

I was released the next morning from the hospital and my husband and I could not move fast enough to go and see Ryan! We found that he was unable to suck and didn’t really have anything for the first 24 hours. The team ended up doing many tests on Ryan and he was there for 5 days. The team of 3 doctors didn’t really know much and they basically told us that he had a paralysis affecting the left side and the way it sounded, he would grow out of that. So after an MRI, Cardiac Echo, renal and scrotal ultrasounds, and an EEG we left the NICU and came home with high hopes that Ryan would ‘grow out of this.’ Early Intervention was arranged right away to help him suck and to monitor his weight, etc. We tried many different things but like the nurses showed us when we left the NICU – to feed him we had to squeeze his cheeks in to help create the suction around his mouth.

We went to Fargo for his 6 week appointment and the doctor noticed that he was not tracking things like most kids and of course, his eyes were crossed and he hadn’t blinked up till that point. So when Ryan was 3.5 months old, we were down to Gillette Children’s Hospital in St. Paul, MN. It was at our neurologist appointment when we found out that things were going to be very different for us. Just from the clinical visit the doctor diagnosed him with Moebius Syndrome. That was the first time we had heard about Moebius, along with all of our family, friends, and even the local doctors. As soon as we returned home, Ryan started Physical, Speech and Occupational Therapy.

Ryan had strabismus surgery when he was 7 months old- to straighten out his crossed eyes; it was amazing what our little guy could grab after that! He had tubes put in his ears also. A couple days after the tubes were put in, Ryan started walking from me to James and slowly we backed up farther and farther. At 18 months, he was walking across the room all on his own! May 2014, he had his second set of ear tubes placed and will be back in January 2015 for his third set of ear tubes. He has fluid built up and it is effecting his hearing in both ears.

In June 2016 Ryan had his first facial reanimation surgery in St. Louis with Dr. Snyder-Warwick. We are planning to have the second surgery early this Spring.

Ryan is now 5.5 and in Kindergarten. He is so smart and has an impeccable memory. He loves to sing and dance as well as building and imagining with his Legos. He loves his technology and enjoys playing games.

He just warms my heart and I know he is going to accomplish amazing things in his life!