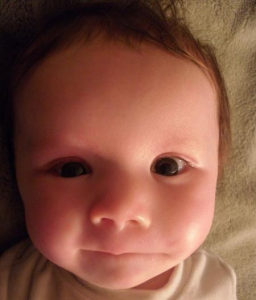 I had never heard of Mobieus Syndrome until last year. Since then, I have learned so much and am grateful for the opportunity to share my daughter’s evolving story.

Sky Lynn was born on the afternoon of December 31st 2010. Almost immediately it was apparent that something was not quite right. At first it was just the asymmetry in her face, what the doctors called dismorphic facial features. Then it was her inability to latch and subsequent feeding issues. She started losing weight and her jaundice began to intensify. She was quickly put on a feeding tube and multiple doctors of varying specialties came to inspect her. By now I had been discharged while Sky remained in the hospital. Day 3 brought more medical professionals: Neurologists, a neurosuregon, a geneticist, ophthalmologist, members of the cranio facial team… An array of tests were ordered and conducted; an MRI of the brain, a Karyotyping test to check for chromosomal abnormalities, EKG, CT scan of the brain, TORCH panel, among others. Her frenulum was clipped in order to improve her suction, but it would be weeks before she could take more than an ounce on her own. By week two I was informed that she was stable enough to come home. I was thrilled and terrified all at once. I was still in the dark regarding what might be wrong… I spent hours frantically researching my daughter’s symptoms online. I recall stumbling onto sites citing Mobieus but dismissed the possibility, clinging to the hope that it was just a compressed nerve. I couldn’t imagine that she had such a rare condition. Those first few months were the most harrowing of my life.

We were very fortunate to have such a wonderful team of medical professionals. It was at one of our appointments with the Cranio Facial Clinic that Moebius was first discussed as a likely diagnosis. The geneticist indicated that children with Moebius are often puzzles for the first year, that all they could really do for now was monitor Sky. She would be assigned a nurse from APORS and be enrolled in Early Intervention. As the months passed, it became obvious that she would need the help. Although healthy in many respects, she was clearly developmentally delayed. She lacked muscle tone and began physical therapy. Occupational and Speech therapies soon followed suit. It was her speech therapist that put me in touch me with another mom whose child has Moebius. It was through that mom that I discovered we are not alone in this. I immediately began diving into all of the invaluable resources out there. I reached out to Vicki from the Moebius Syndrome Foundation who connected me to some more local parents of children with Moebius. I’ve joined as many support groups as possible and continue to seek out others that can relate as well as educate. I hope to attend the next conference and will do everything I can to increase awareness and research. I’m deeply appreciative of the immense support that is already available and want to personally thank everyone who has contributed.

We just celebrated Sky’s first birthday on NYE. She has come so far in the last 12 months! The strabismus has improved enough that surgery is unlikely. She cannot move her eyes laterally but is learning to compensate. Her ability to blink and close her eyes is much better now too. Her facial diplegia is unilateral and mild, affecting the left side only. She fortunately has some function and is able to offer the most beautiful, crooked smile on occasion. She just started crawling and is getting quicker by the day. She is very special baby, incredibly curious and exceptionally sweet.

Sky is a reflection of her name: I look at her and see limitless possibilities.