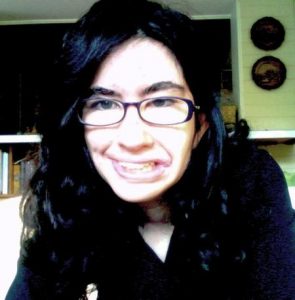 When I was born, apparently I looked as though I had suffered a kind of stroke. My eyes were crossed and the left side of my mouth was droopy. The doctors present didn’t know what was wrong with me, and soon after I was born I was separated from my mother and transferred to another hospital for testing. My parents were young and I was their first child, and I can only imagine how hard it would be to go through a fairly uneventful pregnancy only to give birth to a child with undetected, unsuspected and undiagnosed problems. I had difficulties feeding, and my parents told me that I lost a lot of weight as an infant. A diagnosis of Moebius Syndrome finally came when I was about four months old.

About three-quarters of my face is paralysed. I have had corrective surgery, but my mouth and eyes are still visibly affected. While I can move the right side of my face relatively easily, there are limitations in what I can do. I can’t frown, move the muscles in my forehead, whistle or roll my eyes. I have a crooked smile, a deformed tongue and overlapping toes; problems drinking, eating and cleaning my teeth. I have been told that in the future, my face may droop because muscles don’t work properly or well enough to hold up my features. But at the moment, these are minor difficulties or prospects that I can overcome and work with.

I had my first surgery (to correct my strabismus) when I was around nine months old. I have worn glasses since I was about one year old, and the surgery helped to straighten my vision. I also wore patches until I was about five to correct my lazy eye.

When I was seven, I had my first plastic reconstructive surgery, in which my surgeon transplanted a piece of the gracilis muscle from my left thigh into my left cheek. It was a major operation that took nine hours, and I was in hospital for about two weeks afterwards. I don’t remember very much about the surgery or the time afterwards, but I know it had a significant impact on my life. For the first time, I was able to move the left side of my face. I could “smile”.

Since that operation, I have had several more revisional surgeries on my mouth and left eye. My lip is still bulky due to scar tissue, and the left corner of my lip does not lift up. But I have movement, and that has helped me immensely. My speech has improved, as has my ability to eat and drink.

Around the time I had the last operation on my mouth, I also had a gold weight implanted in my left eyelid. My left eye is more affected by Moebius than my right, and could only close about three-quarters of the way. As a result it would get tired and I’d have eye infections and conjunctivitis quite frequently. The weight allowed my eye to close and to rest more, and I had far fewer infections. I recently needed to have the weight removed as it was causing me a few problems, and am currently resting my eyes and waiting to recover completely.

Until I was thirteen, I had no real idea of why I had paralysis and why I couldn’t do certain things. I’m sure my parents told me about Moebius, but their understanding of it is not extensive. Moebius wasn’t really something I understood or felt that I needed to research. For a long time I thought I was the only one on Earth who looked this way. When I was little, I even thought that I was adopted and that my biological parents were people who looked exactly like me. I knew I was different to others my age, but I had no idea why or how. I was just different.

Much of the information I found on the Internet was very repetitive. Each site just gave the same list of the same symptoms, and I got tired of reading them over and over. Yet even though the information was repetitive, I found myself with more knowledge of Moebius than I’d ever had before. My interest only increased when in Year 9 I joyfully discovered that my school’s Science textbook had a whole half page dedicated to Moebius Syndrome! My teacher asked me to speak to the class about Moebius, and I felt that in some small way I was really helping people to learn about and to understand facial palsy.

Once I started reading personal stories, I really wanted to write my own. Even though I was young, I felt like I had the potential to help parents and people affected by Moebius. With my dad’s help, I submitted stories to various support websites and had several published, and I got a few responses from people telling me how useful they found my experiences. These responses amazed me, as I was a bit doubtful of how much I could help others.

However, the most significant thing occurred in Year 8, when I was asked to present two speeches on my experiences – one to the entire school, and one to the Year 12 class who would graduate before I spoke to the rest of the students. I was thirteen and very nervous, but even to this day I feel like it was one of the greatest opportunities I’ve had to get Moebius and facial palsy out there. Several of my fellow students sent me emails and letters telling me how much they appreciated my speeches and how much they’d learnt about tolerance and physical difference. Even now, I’m still taken aback sometimes when I think about the true power of speeches. They have such an ability to inspire audiences to think and to change, and I truly hope that my small speech was able to do that.

Each person has their own set of challenges. For much of my childhood and adolescence, I saw Moebius as something awful, something that I “suffered from”. I couldn’t see that I am “living” with Moebius, and that while it makes up a big part of who I am it does not define me. For a while, I was only able to see the difficulties that Moebius Syndrome and facial palsy are accompanied by. I couldn’t move my face properly, and that made me different. I was bullied, and that made me different. I didn’t know how to stand up for myself or how to respond to people’s curiosity. When someone asked me what was “wrong” with me or why I had Moebius, all I knew to say was that I was “born with it” – I never thought to say anything about how I live with it. I was very sensitive, and not knowing much about Moebius didn’t really help the situation. I let people get to me very easily, and for a long time I gave in to their insults and stares and saw myself as ugly and different. I couldn’t see – and maybe I didn’t want to see – that Moebius Syndrome is a blessing, not a curse.

I was brought up in a religious family, and ever since I can remember my parents have told me that God gave me Moebius Syndrome because He knew that I was strong enough to handle it. When I think about it, those words have helped me immensely. I cannot recall ever resenting God or being angry at Him for making me the way I am. Of course, I have asked “why”, but my questions have never turned into angry sentiments. I put that down to my parents’ influence, and in a way, not resenting God has helped me to grow in faith.

Moebius Syndrome is a blessing to me because I can see that it has given more than it has taken away. It has provided me with a deepened sense of empathy and understanding, with compassion, with the ability to listen, with the drive to help others and to respect people’s differences. I’m not denying that there have been difficult times, but they are outweighed by the great beauty and gifts that Moebius can bring. I only discovered these gifts very recently. I decided that I wanted to change my attitude. I wanted to stop seeing myself as a victim or a sufferer, and I wanted to show others and show myself that I am not defined by my face. I am not defined by the fact that some of my cranial nerves are underdeveloped or absent. I am not defined by people’s stares or insults.

Moebius Syndrome has given me the opportunity to connect with some of the world’s most beautiful and compassionate souls. I went from knowing of no one else with Moebius to speaking with dozens of people over the internet affected by numerous types of facial palsy. You can only imagine my joy when I discovered that a Moebius Syndrome Foundation existed and that people with Moebius actually met at conferences. Conferences – all about Moebius Syndrome! I was, for the first time, part of a community.

Prior to my diagnosis, my parents had been told that I would never be able to walk or talk. This is a fairly small example of the truth that is misdiagnosis. A lack of knowledge means poor information. These days, much more is known about facial palsy and about Moebius Syndrome, but misdiagnosis still occurs. Last year, I went to a plastic reconstructive surgeon to discuss any potential for future surgery and revision. He seemed surprised when I told him I had Moebius, as he’d only heard of it as existing in its classic, bilateral form. He raised the possibility that I may, in fact, not have Moebius after all.

I am proud to have facial palsy. I am proud to have Moebius Syndrome and to be part of such a vibrant and lovely community, because I believe that my having Moebius was meant to be, that without it I would not be myself.  I believe that in some way, however small or insignificant, I can create awareness and knowledge of something that does not deserve to be overlooked or ignored any longer. And these beliefs make me smile – with my eyes, with my lips and most of all, with my heart.