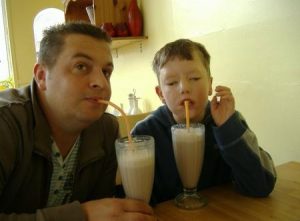 Moebius Syndrome: Thomas Cooper-Abbs was born 21 September 2000 and weighed 2 lb 10 oz, he was just under 11 weeks premature. Although a frightening time, both myself and his mother were extremely happy with our son and felt very lucky to have bought a life into this world.

At first, there were a few problems with Thomas such as feeding and weight gain, but the doctors assured us that it was normal due to being premature. He would not take to a normal bottle, so a tube was fed via his nose to begin with. After a couple of weeks, the doctors saw that he could not open his eyes as he should be able to, and also that his gross motor skills were not in line with how he should be progressing. He seemed to be lethargic, and his left hand index finger along with the next finger would not sit in place, and sat in a ‘claw’ like position.

After weeks of testing and various consultants viewing my son, he was diagnosed with Moebius syndrome, something I had never encountered, nor my partner, nor the doctors caring for him.

Between us we looked into the condition and found many similarities to Thomas. He could not open his eyes, would not take to breast or bottle feeding, and had no facial expressions. Due to him not feeding correctly, as he grew, we used a haberman teet on the bottle, which aided him well.

After two months, Thomas was allowed home. In the early years he slept a lot, possibly up to 18 hours a day and we could see he was not like an child I had encountered before. He fed extremely well, was growing as he should, but he did not move and mentally grow as he should.

As he progressed, when a child should crawl, Thomas shuffled on his back, with his head arched backwards, so he could see where he was going, and although this showed signs of progression, this worried us. He developed bald patches on his head, where he would grace the carpet, through friction and we tried to make him sit up and crawl properly.

After two to three years Thomas started to crawl and our local social services/council placed him in a special needs nursery one day a week to aid his progression. In this time, Thomas went to a mainstream nursery and was doing well.

In this time, help was given to his motor skills, such as identifying shapes, placing objects into holes and light and sense movement, this helped dramatically.

As Thomas grew older, he did very well, he held open his left eye with his hand, but his right eye is till lazy. He grew into such a character, loving, fun and always ‘on the go’. As he went to school (mainstream), he excelled, doing very well in art, maths and english.

His speech has come on leaps on bounds, as well as his learning techniques. We have had a few issues with Thomas’ behaviour, but nothing that any child does not go through.

Thomas is 9 now, and although his mother and I are no longer together, he is a credit to both of us. Thomas has an appetite like I have never seen before in a child or an adult. He is loving, caring, fun, emotional and very well behaved. He is doing very well at school, loves to learn, loves to laugh and joke and I feel very privileged to have him as a son. 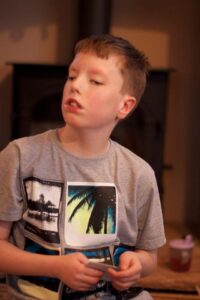