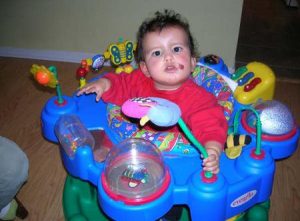 When I was pregnant with Thomas and his twin sister, I had a major bleed at about six weeks of gestation. Both my doctor and I thought that I had suffered a miscarriage. When an ultrasound was performed the following week the technician informed me that I was pregnant with twins and that there was what seemed to be a bruise between the two separate placentas. The pregnancy was further complicated by the fact that Thomas’ placenta was not properly placed. The doctors were concerned that the blood supply between myself and Thomas might not be as good as it should be.

The twins were delivered seven weeks early. At birth Thomas had very low tone, no eye-lashes, he continuously rolled his eyes back into his head, he could not maintain his body temperature, and he was unable to suck. Thomas was intubated when he was first born and then put on a CPAP machine. He had a gastric tube in his nose, and this was how he was fed for the next two and a half weeks.

I quickly noticed that the right side of his face was not symmetrical along the jaw line, his ears were slightly uneven, and his left nostril was a little different from the right one, but just a bit. When Thomas would stick out his tongue, it would always go towards the left and he did not seem to have any muscle tone on the right side of his tongue. When he cried only one side of his mouth would open. The doctors in the neonatal intensive care spent a lot of time looking at him. They had an ultrasound done of his brain to rule out any “brain bleeds”. They had no answers for me. No one could tell me what was going on with my handsome boy.

The nurses worked very hard with Thomas and me. Thomas was allowed to come home after three weeks once he could maintain his temperature and he could be fed with a bottle. It took two hours, each time, to feed Thomas in those early days. Thomas had to be sitting almost upright, and the person feeding him had to hold his lips around the nipple of the bottle with their fingers so that he could suck. Thomas also needed to burp very, very, very, often. His grandfather would sit on the couch with him in his arms patiently giving him his bottle, and then an hour or so later, it was time to start again!
Thomas had frequent visits with his family doctor. He was referred to an ear, nose and throat specialist. He had an MRI, and a sleep study done. I still had no answers. No one could tell me what was going on with my boy. He was referred to a neurologist. I left that appointment with a referral to a geneticist and to a paediatric eye doctor because Thomas did not seem to be able to move his eyes from right to left without moving his head at the same time. I still had no answers.

As Thomas was growing, he still was having trouble with his upper body strength. He took a long time to be able to hold up his own head and then when he did it had an odd tilt to the right and rotation to the left. His doctor referred him to a physiotherapist for torticollis. The physiotherapist during her assessment wondered if his head position was not because of his eye problems and she took the time to approach the eye doctor to try to have his appointment moved up because our scheduled appointment was still four months away. She took a picture of Thomas with her when she did this and the next day the eye doctor’s clerk called to tell me that Thomas would be seen in three weeks.

The day that Thomas had his appointment with Dr. Clark was a very important day. Within five minutes of being called into his office I was finally given a name to go with all the symptoms I had observed and that no one else managed to piece together into a diagnosis. Dr. Clark after a few simple eye tests asked me if anyone had told me that my son had Moebius Syndrome. I told him no. I asked him what this meant and he gave me a bit of an idea. I left his office and went straight to the physiotherapy department, found the physiotherapist and thanked her for her help. When I told her that Thomas had Moebius Syndrome, she too had never heard of this before. Dr. Clark has since passed away before our original scheduled appointment date.

When I got home I got on the internet and found the Moebius Syndrome Foundation and a few other discussion groups of people with Moebius Syndrome, or who have children with this rare condition. This internet community has been a life-line. This past year has been a scary time. It was difficult when I did not know what to expect for my son before knowing that he had Moebius Syndrome. It has been an adjustment to come to terms with the fact that my precious baby will have some added challenges in his life because he has a facial paralysis that so few people even know exists.

Thomas and his sister recently had their first birthday. Thomas has just learned to sit up alone. He is not crawling of pulling himself up yet. He is seeing an occupational therapist to help with his eating because he chokes on any food that is not pureed. He is on a waiting list for a speech therapist.

I am so grateful to the all the people with Moebius Syndrome and to their parents because from the stories that they have share with me over the internet I know that it will take Thomas a bit longer to reach those childhood milestones, but he will get there in his own time. He is such a special boy. One of my good friends put it best when she said one day that his twin when she smiles does so with her whole face, but when Thomas smiles he does it with his whole body. When Thomas is happy, he can’t smile the way is sister does instead, he squeals and laughs and his arms and legs get going so fast that he looks like he is getting ready to fly!