September 18, 2007, a day that started a new chapter in our lives. At 3:06pm in Labor and Delivery of University Hospital in Augusta, Georgia William Joseph Anthony Victor Manning II (AKA Tony) came into our lives. From everything that we had heard about the ultrasounds it was going to be a perfect delivery just a week early due to induction and we would have nothing but a healthy baby boy. Well it didn’t exactly work that way. The lead up to actual labor was uneventful, a little pitocin, and an epidural and I was a happy camper. Other than a short stall and an almost emergency c-section it was great!

Then the strangled first cry of my baby boy came. The doctor had to pat him on the back several rough times and I just knew that something was not right. I saw his feet and how the toes were fused together and how his jaw was receded in a bit too much for a newborn and I saw that his hands were in almost a permanent state of fisting. My emotions ran wild, I couldn’t hold my son at first, they had to find out what was going on. I was crying, the doctor was trying to calm me down, my husband was hovering near where the nurses were cleaning and checking vitals on Tony, and there was just a general sense of confusion in the room.

Tony ended up weighing a small 5lbs 6ozs and was 18 inches long. He was classified underweight, which was no surprise to us since our daughter was born at 5lbs 11ozs 2 years earlier. It was ok for us, we knew that we would have little kids; we are not large people ourselves. After finally being able to see our son and get a little used to the idea of some differences it was a relief that it was not worse that it could have been. My husband and I both feel that Tony was given to us for a reason, and God has a plan for him and we are to show him that path.

Twenty-four hours after delivery I meet a geneticist from the Medical College of Georgia Children’s Medical Center (we will just refer to it as MCG). He was able to tell us that he had had a similar case to Tony in 1986 and though it took him almost a year, back then, to diagnose, it was a diagnosis that had stayed with him. It was Moebius Syndrome, with hypo-dactylia/hypo-glossial syndrome. It was somewhat of a relief because at least the doctors’ knew what it was, but to me and my husband we had no idea WHAT it was.

Over the next two days we were given the answers to our questions from the geneticist and the pediatrician (who had never seen or heard of Moebius), but we never realized that we weren’t asking the right questions. Something else we noticed was that Tony was not sucking or feeding from his bottles correctly. Also he would occasionally tense his entire body and look stiff as a board. None of the nurses thought that is was a big deal so they never really looked into it. I asked repeatedly for the nursery nurses to come and show me how they were able to feed Tony without having breathing problems, but no one came. The week that I had Tony was apparently a good week to have a baby; there were over 40 births within the 2-3 days that we were in the hospital.

We finally were able to go home, with a pediatrician appointment on Monday to hopefully learn more. Over the next 2 days I noticed that anytime I tried to feed Tony with the soft bottles that we were encouraged to use (it basically force fed him) he would start to turn blue and I would have to turn him over or on his side and clear his airway. From learning baby and child CPR from my parents, who were volunteer EMT’s, I knew the signs of choking and I knew what to do to make sure he could breathe again. I did not freak out as most would have, because I knew that we would be going to the doctor on Monday and hopefully wouldn’t have to worry about it for too much longer.

Monday came and the pediatrician was concerned, to say the least. He scheduled an emergency Barium Swallow Study, something else new to me. I won’t lie, I was scared, I knew what aspiration was and I knew what it could cause, but I never thought that I would have to deal with it, especially not with a child of mine. My sister in law was able to come with me to the study and as I watched them attempt to feed Tony I could see the problem, it was on the screen and I knew just enough to know that what was going on with his swallow was not normal. Then we waited…. Finally the Speech Pathologist came out and said that they would be admitting Tony and they would be inserting a nasal gastric tube so that he would be able to be fed without fear of aspiration.

I was shocked, stressed out, and I didn’t know what to say. We were put on the fourth floor of the Children’s Medical Center at MCG. Within a couple of hours we had seen a neurologist, a gastroenterologist, an endocrinologist, and many groups of medical students. It is a teaching hospital after all and after learning more about Moebius, this is definitely something that more medical students need to know about. The neurologist was not as optimistic as I would have liked to have hoped, the gastroenterologist wanted to wait for about a week to take him to surgery and have a gastrostomy tube (g-tube) inserted to replace his NG tube, but they wanted him to gain some weight first. The endocrinologist was there because of blood tests that were taken at arrival to the floor, which showed borderline too high potassium levels.

They put him on high calorie formula, which ended up making his potassium skyrocket. This caused the endocrinologist to call for a mix of Kayexolate and his formula to filter the potassium out of his formula but he would still get the calories he needed. This caused the doctors to have blood tests every day to check Tony’s potassium which fluctuated from too high to too low. The neurologist put through an order for Tony to have an Electroencephalogram test (EEG) to determine if Tony’s occurrences of stiffness were from subclinical seizures. The test was positive and he was started on Phenobarbital. Throughout the next 2 weeks, while in the hospital, Tony was put through x-rays, a CT scan, 4 MRI’s, and countless blood tests. We received a lot of information, most of which was just medical jargon.

Finally Tony was allowed to be discharged, we came home with a lot more than we went in with. First a heart/respiratory monitor, a ‘Christmas tree’ stand that would hold his formula and pump, and information about who to contact about services that would help Tony gain mobility and help with speech and feeding.

Over the past 3 years we have had our ups and downs, but we have come through each with optimism and hope. Tony has had several different surgeries; to include g-tube placement, eye surgery, ear tube placement times 3, and adenoid and tonsillectomies. Tony has shocked all of his doctors and beat the odds that they had first given us. He is mobile, through either crawling or through assistance from a Kay walker. His speech is evolving to that of a 4 year old, when there are no barriers (ear infections or sinus issues) and his intelligence is at the same level. Our family collectively has been wonderful. They are there for our support and for help whenever it is needed, but mainly they are there to love unconditionally a special child. Tony is growing and developing his own personality and proving to everyone that anything can be achieved through determination, a small helping hand, and the right people around you to encourage the work that you are doing. 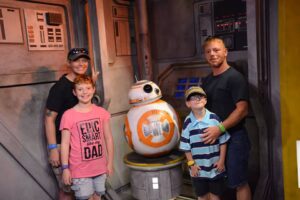