I had an uneventful pregnancy up until 29 weeks. I was then diagnosed with polyhydramnios (that is too much amniotic fluid) An ultrasound done at the stage raised further questions as to the health of the baby. The chest and abdomen measurements were too small, one exam questioned if there was a bladder another suggested difficulty finding the stomach! I left work at noon to be hospitalized that same day and then flown by helicopter to the nearest Women’s and Children’s Hospital.

One week in hospital and on bedrest felt like a holiday…and I was to do this for 6 more weeks…NOT.

My water broke and I went into labor at 30 weeks. The doctors ( including neonatologists, and geneticists, etc) were not very optimistic. We were led to believe there was a very high probability that our baby would not live. Almost 40 hours of labor gave us time to choose both a girl’s and boy’s name so that the baby could be baptized immediately. The staff were instructed to call in the priest if this seemed to be needed. The priest was called, and as the baby’s heart showed signs of trouble he was delivered at high
speed with forceps…

Tyler’s resuscitation was very difficult with the neonatal team working in the next room for what felt like forever (probably 10 minutes) With apgar scores of 1 at 0,5 and 10 minutes He required artificial everything. We were able to see the tiny 2 LB 14 oz baby for a few seconds as they wheeled the incubator past my stretcher. We were allowed to see the baby in the special care nursery once they were all settled in. The routine explained to us felt so foreign. Check in at the front desk to make sure they would allow you to go in…wash at the large trough like scrub sink (suds for 2 minutes, right up to the elbows) all jewelry, rings, watches, etc. had to be removed. Once this was all done we were escorted into the first of 3 large rooms with rows of incubators. Tyler was so tiny, he had dark wavy hair, and beyond that lots of tubes and wires. He had an endotracheal tube and was
connected to a ventilator to help him breath. The special type of
ventilator vibrated like a washing machine to try to expand his little
lungs. After a rest and maybe a few minutes of sleep, we were summoned to the nursery to meet with doctors. I was terrified, what were they going to tell us. Had we lost our son so quickly?

Thank God Tyler was basically the same, and they wanted to further discuss all considerations with us. After the strange feeling of checking into the special care nursery (SCN) that first time it became our new home. Days turned into weeks, turned into months. Immediately it was explained that most premature babies did go home sometime near their due date. We began to tell family and friends that we should bring home the new baby in May. At about 2 weeks of age Tyler was diagnosed as probably having moebius syndrome. A few blood test would be done on Tyler and on me (mom) to rule out any other possibilities. Tyler had no mouth of facial movement. Even his hands were lacking the small wrinkles and lines that would suggest movement of them during gestation. His hands both were contracted, almost into little fists. He got his nourishment from IV’s while I learned to use the breast pump and pumped 6 times a day for 6 months. Eventually Tyler would receive 1cc of milk by ng tube. It did not stay down so back to iv’s. Eventually his feeds were switched to just breast milk by ng tube. We slowly increased the amount and the speed. A syringe was hung above our rocking chair letting the mild drip in very slowly.

By about two months of age we knew we were not the “typical preemie” situation. As other tiny beings (some less than 1 pound) were extubated (removed from the ventilator, and breathing on their own) Tyler could not last more than a few minutes without ventilation. He had to put up with the tube in his nose being retaped sometimes twice a day. We loved our daily cuddles, though it required a nurse and a respiratory tech to help move him and set the ventilator hoses properly. Some days we rocked in this one frozen position for 3 hours.

While being prepared to realize that in order to bring Tyler home he would require a tracheotomy and permanent feeding tube, the doctors began to express concerns that Tyler may not be able to see or hear. They also felt that his muscles would never allow him more than slight physical movement. They began to explain that Tyler would face multiple aspiration pneumonia’s and with such a ‘closed’ world would not be able to communicate though mentally was likely fully capable. They recommended not continuing with any surgical intervention. (In other words, don’t trach, stay in hospital on
ventilator, or turn off ventilator and give-up.) We fully intended to bring Tyler home. We prepared to fight, with the understanding that Tyler must be ‘trached’ in order to bring him home on a ventilator. He showed constant improvement in movement and interest in everything around him. The small changes were noted by family and primary nurses who spent endless hours with him. The doctors only saw him for a few minutes every once in awhile.

Three times over about 5 months we were asked to “make a decision”. Each time our decision was absolute, strong and fully educated! Yes we were prepared to take this child home, no matter what!! You can see that moebius was kind of forgotten at this point of our fight. After 10 long months of fighting, meeting, discussing, and even presenting your situation to the hospital ethics committee, the tracheotomy was scheduled for January 1998. The surgery was performed one day after Tyler’s 10 month birthday!

There is a very positive story from this point. Tyler was weaned off of his ventilator a little at a time. By his 1st birthday he was able to come off the ventilator to attend his own birthday party! After learning emergency trach procedures, and how to suction and change his trach, I was allowed to take Tyler in a stroller and walk around the hospital with oxygen and suction in tow! Further testing revealed that his hearing and eyesight were reasonable if not normal. Tubes were put in his ears to prevent fluid build-up. We reached a point where Tyler only needed his ventilator at night.

It was time to make the transition to home and community care. We live a 2 hour ferry ride from the hospital, so training had to take place for nursing care at home. Nurses were interviewed and hired, the local child development center was informed of our homecoming. A huge party to say goodbye to the staff at the nursery was thrown.

After 15 months we were to leave the home we had become so comfortable in. We were truly leaving family!! The staff had become so attached to Tyler as he was the ‘big boy’ in the SCN. Rarely did they have a baby stay even a year. We were so excited to be going home. Tyler could sit with support and even stand if helped though could not actually make transitions between these positions. Even lying down his only movement was to roll…

Home is a wonderful place. Over time Tyler learned to sit up, stand up, cruise, walk, push ride his bike, and pet his dogs!! Moebius was pretty much forgotten, or even ignored until we got home. I try to educate all of our nurses and community support services with information I print from the Moebius Foundation web site. We have community education by way of a front page article and pictures of Tyler in a local paper, and a local interest TV program did a segment on Tyler and moebius syndrome. My priority now is to
make sure people don’t assume Tyler doesn’t understand or has mental difficulties just because his face doesn’t react… people are learning. Kids are wonderful, they are the ones willing to ask questions.

Tyler does still have many obstacles. We are learning to sign, and he will be getting an alpha talker to speak. He cannot swallow at all, but still he
enjoys lollipops (though very messy!)He is growing taller and stronger all the time. He is running and jumping, and loves to play ball!!

Ultimately—-DO NOT TAKE THE DOCTORS’ WORDS AS FINAL!!! Listen to them, think about them and consider what you would do if they are right, and then PROVE THEM WRONG!!

Tyler is truly a blessing to our family. I would never change any decisions we made or want to do anything differently. Most of all I feel sorry for all the people and parents out there who don’t know or have a ‘tyler’ of their own.

Enough now, please email me if you have similar history, and especially if an older child has similar obstacles in their daily life.

Hi, my name is Denise and I am really enjoying your web site. I think this will be a great reference for many of us.

Our story is a long one, so first I’ll tell you our current situation and
then try to fill you in on how we got to this point.

Our son Tyler has moebius syndrome. He was diagnosed at about 2 weeks of age. Almost all of Tyler’s cranial nerves are involved. He breathes through a tracheostomy, and is on a ventilator at night time. He is j-tube
fed. He is also as active as any other two and a half year old. He is very bright, and quick to catch on. He is very very very social, and loves constant interaction, and is quite the entertainer.He began walking without any assistance at 31 months of age after many months of ‘cruising’ with
assistance. The two months since he ‘let go’ he has progressed daily to come close to the physical abilities of other children his age.

As far as living day to day with moebius… Tyler is very quick to share his emotions through body language, huffs and puffs, sign language and making faces(this is done with fingers in the mouth
to pull funny faces) Communication for Tyler does frustrate him at times, we are all learning to sign together. Often Ty will remember the new signs when we cannot!

Currently our biggest concerns involve Tyler’s eyes. He doesn’t blink, and they are open while he sleeps. We apply lacrilube ointment every couple of
hours, and so far this is keeping his eyes moist and healthy.

To those meeting Tyler the first thing noted is Tyler’s open mouth, and constant drooling. He wears a bib, and carries his ‘spit cloth’ which he is pretty good at using when reminded. The most common remark is about his
bright, beautiful, blue eyes!!

This is a pretty choppy ‘this and that’ but hopefully provides the basics of our life with moebius.

I would like to have our email available to anyone, especially involving questions of feeds, trachs, and doctors’ prognosis concerns.
That will be my next story (it’s a long one) of how a premature baby was given pretty much no hope, and then fought through 15 months of ….that will be the next story! 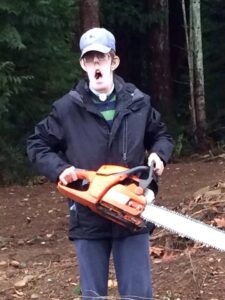