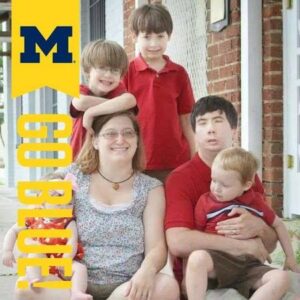 How does one begin to explain the last twenty-nine years and what they have brought about? I can only begin by saying that God ordains my every step and provides his grace through the good and bad times. There have been times that have been wonderful and times that have been beyond hard. There have been times where I have questioned everything and times where quietly trusted. Through it all God has been there every step of the way. This isn’t just about my life with Moebius, but it is about a God who knew exactly what he was doing when he created me.

From birth something was different about me. I came out with little color and needed oxygen. I spent the first week in NICU and another week in the hospital after that. I also had club feet so I came home with a cast on my left foot. A few months later after some testing I was diagnosed with Moebius Syndrome.

Moebius affects people in various ways. In my case (like everyone who has Moebius) the fifth and six cranial nerves in my face didn’t develop. In essence I can’t make any facial expressions. I have a hard time pronouncing certain letters because my lips don’t close completely. I also have strabismus where my eyes are turned in toward each other. On top of that I have poor hearing due to a doctor putting tubes in my ears too many times. I also didn’t walk till I was two. The doctors told my mom that I would never walk or talk.

My childhood was somewhat different from other kids. The one thing that I remember quite well is the frequency of doctors appointments and surgeries. My first surgery was to correct my foot, then that was followed by throat and eye surgery as well as having tubes put in. After that came jaw surgeries and more ear surgeries. Because of my small mouth I had to be put to sleep to have my baby teeth pulled. As you can imagine I got to know the hospital quite well.

The other event that shaped my early childhood was the absence of my father in my life. He left when I was three. This would come to affect me much more as I grew older. My mom remarried but my step dad and I were never close. The absence of a father was very hard.

My middle school years were extremely hard. This is when it really hit me that I was different.  My peers at school made fun of me and I was often the subject of jokes and ridicule. This continued throughout junior high and high school. During this time my self-esteem dropped dramatically. I begin to question why God would make me like this. Why did I have to be the one that was different? Why did I have to be made fun of and laughed at? I hated going to school and the thought of getting up in the morning sickened me.

It was also during this time that I decided to surrender my life to Christ. I grew up in church and knew the Bible stories, but up until this point I had never understood the love that God had for me. Some of you who read this may not be a Christian or want anything to do with God, but I am who I am today because of him. I can’t write this and my place him in it. He doesn’t make mistakes and when he created you and I he knew exactly what he was doing.  Me having Moebius has never taken God by surprised.

After high school I went to Columbia International University where I received my B.A in Bible and Youth Ministry.  I want to reach out to teens and be there for them. My time at CIU was great. My two best friends are friends I met in college.

I am now married and a father to two wonderful boy. I am the husband to an amazing wife. Honestly I never thought I would get married because I wondered who could look past my limitations. God proved me wrong again. Being a dad is an amazing thing. My dad was never there for me and I want to be there for Ian and Judah.  Our little Judah has some medical issues of his own and everyday is a new adventure.

As I look back over the past twenty-nine years I see that I was never alone. Today I wouldn’t want to be anyone else. If ever given the choice to not have Moebius I would say no. This is how God created me. My hope is that I can be an encouragement to others who are hurting and dealing with hard things.