Willem was born at 10:40am, July 12, 2005. My first thoughts were how happy I was that big brother Ben would have a playmate just shy of two years younger. As with my other two children, it was love at first sight. As his first day progressed I was calm but concerned and confused that I could not get him to nurse. After 11 hours of repeatedly trying to get him to latch on, one of the nurses said that they would have to try to feed him with a syringe because he doesn’t seem to want to suck. He ate from the syringe.

The next morning our pediatrician came to see Willem. She noticed some things that were “not normal” about him. She didn’t like his cry, he was “floppy,” he didn’t seem to be able to suck, his face didn’t move when he sneezed. She recommended an MRI and a few hours later my husband Michael helped wheel him down to the neurology wing for his first of many medical procedures he would undergo in his first few years of life. The MRI came back normal and we were sent home with a Haberman feeder bottle and the very vague diagnosis that there is something wrong with my son but no one knew just what it was.

We were given a list of neurologists to call and we took the appointment with the one who would see us first. Meanwhile, my mother-in-law was doing tons of reading on the internet and discovered something called Moebius Syndrome. She remembered seeing something on Oprah years earlier and wondered if this could fit with Willem’s symptoms.

At three weeks old, we went to the neurologist and she said, no, it wasn’t Moebius Syndrome. She saw his eyes rolling back in his head and a tendency to arch his back and suspected seizures. She recommended a 24-hour at-home EEG. Though the results showed no clear signs of seizures, she said it’s her practice to medicate patients so she prescribed Phenobarbital and said we may need to keep him on it until he’s two years old.

Needless to say we were skeptical of this doctor’s diagnosis. We were scared and desperate for answers but something told us this doctor’s advice was not in the best interest of our son and we went running for a second opinion.

A few weeks later we got into Columbia University Children’s neurological department and we shared our story. The doctor excused herself from the room, came back with a text book opened to Moebius and said, “Well I think Willem looks a lot like these babies. I think he does indeed have Moebius.”

Finally a doctor agreed that he exhibited the symptoms: no lip closure to seal his lips for a proper suck, no lateral outward eye movement, no blink reflex, very low muscle tone. His hands and feet were fine but we read that does not always go with Moebius. It was such a relief to not have a mystery baby.

She also asked why he was on the Phenobarbital.

We went for a 48-hour EEG in the hospital which showed no seizure activity so he was weaned off the drugs. Amazingly enough, at the same time, three-month-old Willem Wuebben latched on for nursing! He had graduated from the Haberman feeder, to a normal bottle while we squeezed his cheeks to form a latch. Now he was nursing without bottles or other aids. I never gave up and now I see how helpful it was for strengthening his tongue.

Then life just progressed slowly. At nine months he sat up on his own. Then he learned to roll around to get around. He never learned to crawl but after he was a year old he started scooting on his butt to get places and put holes right through the bottoms of his pants!!! Willem’s amazing physical therapist recommended orthotics for his feet, he also used a walker a bit. He continued to battle low muscle tone and had a very loose center of gravity but the more he did the better he got. Finally at 2 years and three months, he took his first steps.

He still has some challenges to overcome. At 18 months he had his first strabismus surgery. At 3, a second. His eyes are still crossed a bit and he wears prism glasses.

Willem is now five years old, and still has trouble sleeping. At night his sleep is very restless, and during the day it’s not uncommon for him to fall into a deep sleep while eating. We went to see a specialist who initially thought the problem was narcolepsy but after a sleep study we pretty much ruled that out. So the sleeping mystery continues.

We have been noticing how frustrated Will gets with the things that are often taken for granted by others. He still cannot take the step out of our minivan, (a depth perception thing?) He has a hard time with the coordination of getting his shoes on. BUT we are watching him slowly master getting his own shirt on, zipping up his footie pajamas, brushing his own teeth. Having watched Willem overcome so many hurdles in his young life we know there’s nothing he cannot do!!

We work on speech therapy regularly and Willem is getting great tongue movement and slightly betters lip closure and a bit of movement in his left cheek. He fights us on it just about every day but it is working so we keep doing it! I look forward to a time when he realizes I’m doing all this to help him and I’m not just a really mean mom.

Willem also has some sensory issues. He shakes his head, or kicks his legs erratically, or jumps up and down repeatedly or makes loud sounds. Pretty much since (forever) we have always asked our neurologist about it and she says he will grow out of it (not wanting to label it as a disorder). The crazy part is his teachers say he does none of the above in school except for his head shake (which we call his happy dance and have always considered it a replacement response since he can’t smile.) Since his teacher says it is not happening in school, maybe the doctors are right this shall pass!

Willem is doing amazingly well in Kindergarten and he’s a favorite of his teachers. He is learning to read and write but has trouble pressing his pencil hard enough because of his low muscle tone. But the more he practices the better he gets!! I recently went on a school field trip with his class to a pumpkin patch and I was so proud of him sitting with his friends at lunch and walking all over the farm, such a big independent boy!

And that is Moebius in OUR lives so far… 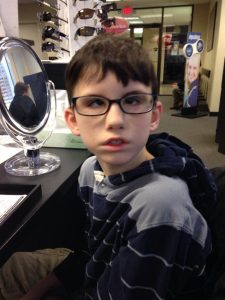