Moebius Syndrome: Zayden’s life started on 8/9/10. From the moment he was born, we knew he was special. He was an absolute surprise and survived the miscarriage of his twin at 10 weeks. We knew this little guy was meant to be here for a reason.

This reason became very clear, very quickly after he was born. His right eye was wide open, even in the bright lights, and the right side of his mouth didn’t move when he cried. Doctors noticed, too. He was taken from us and sent for an MRI because doctors feared that he had suffered a stroke during delivery. After that, I only remember a parade of doctors in and out of our hospital room. Ophthalmologists, neurologists, pediatric surgeons…you name it and we met them. The only thing they couldn’t give us were the answers we wanted.

It wasn’t until the next morning while sitting in the NICU of Geisinger Medical Center with our newborn son that we heard the term “Moebius Syndrome.” It was mentioned by the doctor doing rounds with a group of students so quickly that I didn’t even remember the name. We were just given a baby with a “syndrome” and told that doctors would be in touch. I was terrified.

That was 8 1/2 years ago. Today, all of the fear that we had has turned into pride for the completely cool little man we were blessed enough to have been given as our son. He is silly, he is kind, he likes to play Fortnite with his friends on his Xbox, and has the biggest heart. He recently started playing Upward basketball and goes hard on and off the court. He gets angry, he gets sad, but he ALWAYS gives the best hugs and tells us how awesome we are (which actually means, “I love you.”). He is different, but he is a normal kid. He is Zayden. Unless you know him, there is no other way to describe him.

What we thought was a “syndrome” has become a part of our family. We have added members to that family through all of the other people that have been touched by Moebius Syndrome. If we have a question, we know where to go…not to the doctors that have never seen this diagnosis, but to the families that also know what it feels like to question. They have helped us navigate nursing issues, preferred eye drop surveys, and the dreaded IEP meetings. You can’t have this kind of connection with people because of a medical school education. This kind of connection comes from experience and compassion, and we are grateful for everything that we have learned from the people in the Moebius Syndrome community.

In the words of Zayden, “You are all awesome.” Thank you so much. 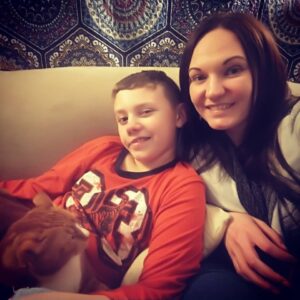